Skip to content
Home / Delve into the Depths in the Kobold Blog / Monday Monster: Clockwork Hounds 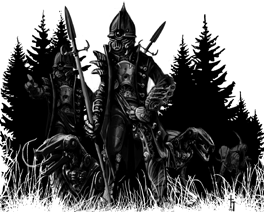 They were once the province of the corrupt aristocracy, running down escaped slaves and tracking prey in hunting expeditions. Those days are gone, but the clockwork hounds still tick and hunt. The Praetors of Zobeck seized them during the revolt that established the Free City, and now, they operate only on the command of the secret police, hunting down persons of interest wanted for more aggressive questioning.

Hounds sometimes operate alone, but usually, they are sent into the streets seeking their quarry as a party of three hounds and two huntsmen. Because they are unsleeping and tireless, few can hide from them for long without magical assistance.

Clockwork huntsmen and hounds are painted matte black with mithril trim, occasionally outfitted with armor or barding for added intimidation. Common folk detest them; all but their keepers and commanders shun them. They represent a link back to Zobeck’s darker past and remind all of how it came to its present state.

[mba] Ratcheting Bite (standard; at-will)
+12 vs. AC; 1d6+4, and the hound locks its jaws into the target (save ends); when locked on, the hound can hit automatically, using all its actions for the round and dealing normal damage plus an extra 1d6 of damage for each consecutive round the hound is attached.
[m] Whip Tongue (standard; at-will)
Reach 3; +10 vs. Reflex; 1d6+4 damage, and the target is knocked prone and pulled 1 square
Unrelenting Tracker
If the hound hits a target with any attack, it gains a +10 bonus to Perception checks against that target; the hound can use this bonus against a single target, and it lasts until the hound changes targets; the hound can choose to change targets at any time with a successful attack.

Clockwork hunters appear in Kobold Quarterly #10 with full 3.5E stats. Subscribe today and let us know what you’d like to see!