Skip to content
Home / Delve into the Depths in the Kobold Blog / Monster Monday: Sorrow Singer 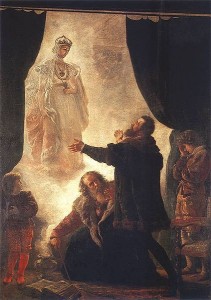 A soft and achingly beautiful lullaby drifts to your ears. Strangely compelling, its harmonic overtones cause your focus to drift. Nearby, a baby starts squalling, but perhaps oddly, it doesn’t matter. Nothing matters—not even the strange woman who is slowly moving toward you. Behind her, you can barely make out drifting forms, but you’re too tired to care.

Dare you take a look at the sorrow singer? Will your game be the same if you use this creature? Also: Welcome to the New Year! Enjoy this disturbing bringer of kidnapping and missing child storylines.

Fast Healing (Su) A sorrow singer’s fast healing ability is equal to its current number of spawn. This fast healing applies only to damage inflicted directly on its body, and it cannot be applied to heal spawn.

Sorrow Born Sight (Su) A sorrow singer can see and hear everything its spawn sees and hears out to a distance of 1,500 feet.

Sorrow Song (Su) As a standard action, a sorrow singer sings a beautiful but terrifying lullaby. Babies who hear the lullaby begin to cry, and adults are affected as per the deep slumber spell (caster level 5th). The target must be able to hear the song to be affected by this ability. A successful save renders a creature immune to this ability for 24 hours.

Ecology
A sorrow singer is sometimes created when a woman dies during a difficult childbirth. She thirsts for blood, primarily seeking out infants to create spawn. A sorrow singer appears as a pale beautiful woman with a gaping dark wound in her belly. The flesh around the wound wriggles like small scarlet tentacles, eager to pull in prey. She smells like lovely flowers and sickening rot. She is typically accompanied by several sorrow born that gently float around her like twisted cherubs.

Once a sorrow singer has captured an infant, she places it inside her grasping womb wound. There it incubates for one day before it crawls its way out, reborn as a sorrow born. The sorrow born appear as pale babies with impossibly large mouths filled with rows of needlelike teeth. They work together to bite opponents and strip their flesh, swarming over enemies like demonic piranha.

Sometimes called the “Pontianak” or “Lullaby Lady,” a sorrow singer takes blame for any missing babies in the area. Some believe that sorrow singers favor male infants, and so in many cultures it is common to make boys grow their hair long at a very young age to ward off the lady. In these cultures, it is common to keep a watch over a newborn child. Villagers in these locations perform many holy rituals when a woman dies during childbirth to ensure that she rests in peace.

Habitat and Society
Sorrow singers can be found in any environment, but are most typically found in urban settings such as cities and villages. They typically come out under cover of darkness. They often disguise themselves as a living humanoid woman to stalk their prey.

Tactics
A sorrow singer sings its haunting lullaby, causing any infant hearing it to begin to cry. She then follows the sound of the crying child, putting to sleep or slaying any adults who gets in her way by using her ravenous spawn or her own razor-edged claws. She approaches stealthily or disguised as a beautiful woman, and she preys upon males gleefully.