Skip to content
Home / Delve into the Depths in the Kobold Blog / Quick Encounter: The Yellow Musk Creeper Ambush 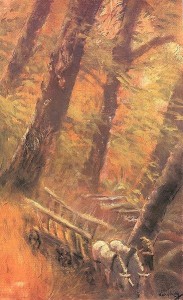 As the party travels along the forest-lined road, they come across an overturned cart. The contents of the wagon were six large wooden barrels, which now are scattered alongside the road. From the other side of the wagon comes the weak whuffling of an injured horse.

If you’re in need of a quick and straightforward low-level encounter to pass the time along a party’s journey, the yellow musk ambush might be exactly what you need.

After reading aloud the text above, allow the characters to make Perception checks. Use the table below to determine the results. If a character has succeeds at a DC 17 check or higher, he or she sees the result noted below, plus all lower DC results.

DC 15: The character notices a group of people standing at the edge of the woods.

DC 17: The people at the edge of the woods are zombies.

DC 20: There is one zombie for every two PCs (rounded down).

DC 25: The character notices a plant with tendrils burrowed into the skull of a zombie.

The zombies in the woods remain there until the characters move to leave or advance on the zombies. In either case, they charge and attempt to gang up on a single character, knock him or her unconscious, and drag that character back to the yellow musk creeper.

A character that makes a successful attempt to track (DC 17) can identify that someone was dragged from the wagon into the woods. If a character becomes aware of the plant, either by the Perception check above or due to another character pointing it out, he or she can make a DC 15 Knowledge (nature) check to identify it is a yellow musk creeper.

If the characters search the area, they find the body of the former owner of the overturned wagon within the tendrils of the yellow musk creeper.  On his corpse is 15 gp in various coins, a potion of cure light wounds, and a written order for the delivery of six 55 gallon barrels of premium ale to a nearby town. The agreed delivery price is 150 gp.

A DC 20 Strength check is necessary to right the overturned wagon.  All the PCs can aid one character, and a result of 15 or less breaks the axle of the wagon, rendering it inoperable until it can be repaired. The horse is stable, though incredibly injured (–3 hit points). The other horse that was drawing the wagon is dead.

A whole new set of adventures and encounters can open up when the characters deliver the ale. Here are a couple of examples to get you started:

1. The paranoid innkeeper who accepts the order suspects the characters of murdering the cart owner, who was a cousin of his. The characters are later arrested by the local town guard, put through a swift sham trial and then convicted of murder and robbery. They must then escape and prove their good name by securing the body of the lost cousin and bringing it back to town—grisly work indeed!

2. A nefariously evil druid was trying to shut down or embarrass the inn to which the ale was being delivered. She created the plant as a trap for the brewer. Now she is upset that the PCs foiled her plan and plots revenge for some time later when it can be served up in her favorite manner: cold.