Skip to content
Home / Delve into the Depths in the Kobold Blog / Trapsmith: Ball of Tentacles 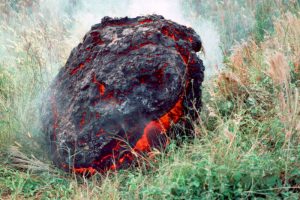 The corridor you have been following opens up into a large square room. In the middle of the room, a large circular shaft extends downward with a diameter of 20 ft. Another corridor connects to the room, much wider than the one you followed, the corridor rises upward at a low angle. The corridor has eight alcoves, four on each side, spaced 15 ft. apart. The first alcoves are 5 ft. from the corridor’s edge. After 85 ft., the corridor narrows to a width of 10 ft.

The red section on the map indicates where the trap’s trigger is located. After the trap is triggered a large boulder is released.

A low rumbling noise, accompanied by tremors and a shower of dust signals the arrival of a huge boulder…

The boulder appears at the edge of the smaller corridor as indicated with the B on the map; it moves on a 7 initiative.

The PC’s might think they can easily evade the boulder by moving to the edge of the corridor or into one of the alcoves, but that indicates that they underestimate the cruelty of trapsmiths.

As the boulder exits the smaller corridor it sprouts ethereal tentacles that extend 20 feet from the boulder’s edge.


The black tentacles spell lasts for 15 rounds and the walls of the shaft require a Climb check (DC 20). 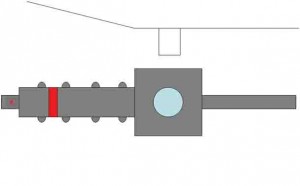 5 thoughts on “Trapsmith: Ball of Tentacles”