Skip to content
Home / Delve into the Depths in the Kobold Blog / Relic: Pendant of Rebirth 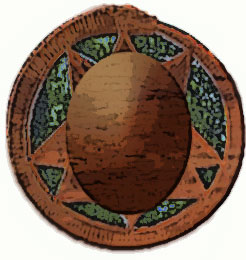 This worn, roughhewn oak pendant of unknown origin is carved in the image of a snake eating its tail, surrounding an egg. About 1/4th of the pendant is covered with a band of many small green sprouts working their way out of the cracks in the old wood, while the rest is warped, dry, and remarkably aged. The pendant hangs from a wooden chain necklace that loops from a gap in the snake’s mouth. If observed over the course of a lunar month, the sprouts continually shrink back and grow anew, the band revolving slowly around the pendant’s surface.

When the wearer of this pendant dies, whether through disease, violence, old age, or otherwise, the pendant rots to dust over the course of a day. The pendant becomes useless to other characters at the moment of the wearer’s death and until the wearer is revived. After that day has passed—whether the pendant was taken from the body or not—the person who died wearing it can be brought back to life at any time they choose for one week, as if through the spell reincarnation, with the exception that he or she receives no negative levels and, if the wearer died with spells cast, he or she is revived with a full list of prepared spells. The wearer reforms at any location that is familiar to him or her, and the amulet reforms with his or her body.

The wearer can also choose to come back to life exactly a year and a day after death, in a body that is a healthy duplicate of the one he or she had at death, and he or she shows up at the exact location of death. The price of this timing is that the amulet does not reform with the former wearer. It instead slowly grows from a tree branch on a random tree somewhere else in the world, and it remains a normal growth on this tree until 11 years after the last wearer’s death, at which point it can be cut down and attached to a new chain. It favors trees that are cared for by pure-hearted people.

The pendant is used at the moment of death. People wearing the pendant who are revived through other means after death but before the pendant brings them back do not receive the effects that using the pendant would bring—though whether the pendant reforms with them still depends on which option of the pendant they chose upon death (treat the pendant’s ultimate disposition as if it had been used to revive the dead wearer).

Destruction
The Pendant of Rebirth can be destroyed by being placed around the neck of a lich that is then killed after its phylactery is destroyed. It revives the lich as a living being as if the lich were a normal wearer, but the pendant never reforms.

2 thoughts on “Relic: Pendant of Rebirth”