Skip to content
Home / Delve into the Depths in the Kobold Blog / Beyond Damage Dice: Midgard Weapons 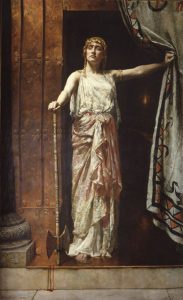 The tijino poleaxe bears a long axe blade in front, with a long, looping backhook designed to unhorse riders. The tijino poleaxe has reach. You can strike opponents 10 feet away with it, but you cannot use it against an adjacent foe. As a polearm, tijino wielders can also use the disarming parry and trip maneuvers.

Unmount. As an action while wielding a tijino, you may make a single attack against a mounted creature. If the attack hits, the target must make a Strength saving throw. On a failure, the target is dismounted and falls prone.

The nordmansch greataxe likely originated with the foresters and lumberjacks of the Ordenn forest, who found a secret way of making axe heads they continue to keep secret. The Nordmansch make more axes than their woodsmen actually need.

The nordmansch greataxe is a two-handed weapon built to sunder other weapons. Its edge is hardened especially for this purpose, and its haft is likewise set with trapping prongs to catch and hold a foe’s weapon. At the GM’s discretion, typical greataxes may also use the sundering strike maneuver.

Sundering Strike. As part of the attack action, make a single attack roll with your nordmansch against a creature wielding a weapon, including natural weapons. If the attack hits, the weapon is damaged, and all attacks made with this weapon have disadvantage. Another sundering strike destroys the weapon. This attack has no effect on magical weapons, unless your nordmansch is also magical.

Disarming Parry. When a creature attacks you with a weapon, you may use your reaction to catch their weapon in your nordmansch’s prongs and disarm them. Make an attack roll with your nordmansch. If the result of this roll equals or exceeds their attack roll, their attack misses, and they must succeed on a Strength saving throw or drop their weapon.

A hand-and-a-half sword designed to pierce heavy armor and sharpened only on the tip, an estoc is 4 feet long, sometimes with a second crossguard. It is said to have been used first by the knights of Vael Turog and Balinor against the elves but now is used by dwarf mercenaries and human knights who expect to fight other heavily armored warriors. Its anti-armor properties make it popular with monster hunters and dragon slayers as well. Sometimes called the “tuck.”

The estoc has no maneuvers but has the following special property:

Special. The estoc deals an additional 1d6 damage to creatures wearing heavy armor or naturally armored creatures with an AC of 16 or higher.

This longsword has a spring-loaded poniard concealed in the hilt, which quickly extends when the hilt is gripped in a particular way. It is particularly beloved by rogues as the concealed blade helps them sneak attack opponents already locked in combat. Kariv of a crueler bent have been known to poison the secondary blade.

Hidden Poniard. If the poniard is still concealed within your sword’s hilt, you may make a Dexterity (Sleight of Hand) check opposed by a target creature’s Wisdom (Perception) check. If you win this contest, you may make a single attack roll with the concealed poniard against that target. This attack has advantage.