Skip to content
Home / Delve into the Depths in the Kobold Blog / Monster Monday: Shroud Eater 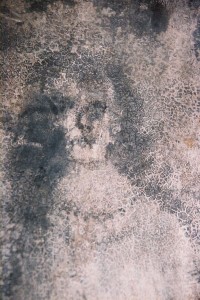 This woman was once beautiful, but her bloated features are now just one horrible mask, a parody of her former self. As she nimbly emerges from the darkness, the details of her terrible transformation becomes all too evident: the tattered remains of her own burial shroud are being slowly consumed by the distorted mouth of the creature she’d turned into. The rotten tissue within the oral cavity has transmuted into a putrid mass mixed with dark blood whose stench is unbearable.

Create Spawn (Su) Creatures that die from bubonic plague after having been infected by a shroud eater rise from death either as plague zombies or as shroud eaters in 1d4 days (one shroud eater out of a hundred victims). Plague zombies blindly obey their unwholesome creator; this isn’t the case with newly created shroud eaters however, which often leave to spread the Black Death far and wide.

Gaseous Form (Su) As a standard action, a shroud eater can assume gaseous form at will (caster level 10th), but it can remain gaseous indefinitely and has a fly speed of 30 ft. with perfect maneuverability. This ability habitually serves the creature solely to leave or return to its grave.

Pestilential Stench (Ex) This ability functions as the stench ability, but causes affected creatures to be potentially infected with bubonic plague. Dire rats and rat swarms that enter within a shroud eater’s aura of pestilential stench automatically become plague carriers with the exceptional ability to transmit bubonic plague instead of filth fever with their bite attack.

Plague Carrier (Ex) A shroud eater potentially infects those it bites or lacerates with its claws with bubonic plague.

Shroud (Ex) A shroud eater’s burial sheet (hardness 2, hp 10) contains a portion of the creature’s force. If the shroud is ever destroyed, the shroud eater takes 1d6 points of Charisma drain per hour until utterly destroyed. Attempts to destroy or steal a shroud eater’s burial sheet require the sunder or disarm attempts. A shroud eater can eat a portion of its burial sheet (1 hit point) to regain 10d100 hit points but must do so while in a mass grave counting at least ten corpses during 1d4+1 consecutive nights. To prevent a shroud eater from swallowing its burial shroud, one must exhume the creature at dawn, cast consecrate on the area, and stick a brick or stone taken from a holy site between the jaws of the undead. The decapitation of the plague-ridden creature isn’t a sine qua non measure.

Weaknesses: A remove disease spell prevents a shroud eater from transmitting bubonic plague for 1d4+1 hours while heal and mass heal do the same for an entire day besides the damage dealt.

There is a good reason why the Septime avoid long sieges apart from the expenses such endeavors require, and they rarely speak about it out of shame; the Plague War is a disgrace that the Seven Cities never want to repeat—an event best forgotten. But how can you omit the past when the undead creatures you help create still exist nowadays?