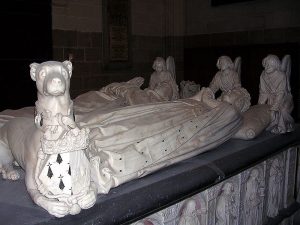 It takes a special sort of person to work with the dead . . . and an even more special type to want to keep them resting. The Crypt-Keepers are an ancient order of reclusive sorcerers and wizards who have dedicated their efforts to securing the sleep of the dead from all that would disturb them. Most often, this manifests in the creation of numerous enchantments in and around tombs, and many an adventurer has unknowingly blundered into one of their traps. They rarely advertise their affiliation, though all of them are lawful in nature, and sometimes they journey across the land to find new tombs to protect. They tend to get insulted when treasures are removed from tombs, but at the same time, they can be very grateful when treasure is returned, and the same magic used to protect tombs can often be put to good use making other ruins and dungeons much safer. Little is known about any headquarters or branch locations they possess, though such areas are likely to be near graveyards or particularly notable tombs, yet appear to be quite ordinary from the outside. Incidentally, their order is very popular among rulers and those who wish to have their tombs protected; the Crypt-Keepers are quite happy to help, and the generous funding they get from this ensures the livelihood of their order.

Lords of the Open Grave

Why waste a good body when you can put it to use? The Lords of the Open Grave are a group of necromancers and masters of Tomb Magic who have long held to the belief that dead things are good tools. Their views often vary on the status of the living (some see nothing but future materials, others see something not to be bothered unless it’s necessary to do so), but all of the lords have few or no qualms about reanimating the dead. Most of them are more stationary than they are mobile, casting magic over fairly long periods of time in order to set things up to their liking and allow for entire armies of undead to be raised. It’s not unusual for a Lord of the Open Grave to be the true master of a village that few ever visit. While some of them are undeniably selfish, a surprisingly consistent line from the members is that they want to be ready. Unfortunately, they’ve never said exactly what they want to be ready for, but their actions suggest it’s the sort of thing where a sudden appearance of multiple armies of undead might make a difference. While the Lords of the Open Grave are most known for their necromancy, the wise adventurer will keep in mind that they’re just as adept at getting to the bodies (even through heavy traps) as they are at reanimating said bodies. Tomb magic is often helpful that way.

Due to the Dead (General)

Your long years of service helping the dead have been duly rewarded by the gods. The practice hasn’t hurt, either.

Benefit: Targets take a –1 penalty to their saving throw against all non-evil necromancy spells you cast.

Loyalty Beyond the Grave (General)

Your plan for the future is something so important that undead you control will listen to just about anything you tell them.

Benefit: When using command undead (as the spell, or a similar ability at the GM’s discretion), you automatically succeed on your Charisma check and intelligent undead will not resist your orders, even if they are suicidal or obviously harmful ones.