Skip to content
Home / Delve into the Depths in the Kobold Blog / Book Review: Contagion, Book Three of Toxic City 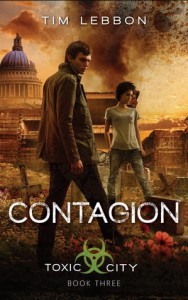 London was attacked by terrorists two years ago—and the attack was more than a double-decker bus or Tube bombing. No, this attack devastated London. But not everyone died in the attack, and some of the survivors are changing in ways no one can fathom. These changes and the destruction of this once grand city have caused the government to cut London off from the rest of the world to keep those changed people from infecting the rest of England and possibly the world. So, now London is surrounded by a large force of well-armed soldiers know as the Choppers. The Choppers have established an exclusion zone, and they protect it with extreme force. Meanwhile, the general public has been led to believe that London is now a toxic city. What the people don’t know is that the Choppers are using London as one big test lab where they can figure out how to exploit the fantastic powers that Londoners are developing.

Jack and his friends have developed these powers, and their powers are growing. The mysterious woman who caused all of this trouble, called Nomad, is close by and still continues to influence activities in London. The Choppers, in the meantime, have decided that enough is enough, and they have placed a nuclear bomb in London that will truly finish the city. Jack and his friends are the only ones who can stop it, and they have only 17 hours in which to do it.

Contagion is the third and what appears to be the final book in the Toxic City series. It also happens to be the first book that I have read in the series. It is tough coming in on the tail end of any series, especially a trilogy, but Tim Lebbon had the authorial skill it takes to make coming in late not so bad. The beginning was a bit jarring and rather esoteric, but after that ended, I gained an idea of what was going on and picked up enough about the background information to follow the plot.

This book is targeted for ages 12 and up, and for a good reason: There is violence and some foul language. I have no problems with this, and most of the time it was no worse than you would see on prime-time TV, but I recall someone dropping an F-bomb and I think the story would be just fine without it. Going without it might make this good story more accessible to a larger, younger audience.

This book did feel like an episode of 24—only they had 17 hours instead of 24 hours. As the chapter number increased, the counter on the bomb decreased. It was well done—even under time constraints, Lebbon created a sense of urgency without rushing things.

I did feel like some of the characters would have done well to be a bit younger than they were, though. I understand that this book takes place two years after the attack on London, but the trials that these young adults are going through would seem even more horrific if, say, a pre-teen or a newly minted teen was experiencing them. Because of the subject matter and characters, I think this series will get lumped with the Hunger Games, and, in many ways, I think that is a fair association.

There were a few times during the action scenes where I felt lost, and several abrupt transitions took place between the moments of action and after the bullets stopped flying. None of this ruined the book, but some minor work on these aspects would make this story even better. Yes, this series looks like it could be made into a movie. In fact, if I read correctly, Lebbon is working on the TV series version of the Toxic City series. One other great aspect of this story is that even though it takes place in London, Lebbon didn’t try to shove local favorite landmarks down my throat. Lebbon kept the major sites mostly out of the equation, which might allow this story to take place in most major cities, and his way of handling the setting also didn’t leave me feeling left out.

Contagion is a fast, comfortable read. Due to its length and print size, it should be just the book you need to kill a slow afternoon. It isn’t that the subject matter is fluff or that the writing is at the Teletubbies level—it is written to appeal to adults, young and not so young. The cover art is outstanding, and the concept is fresh enough that it makes you want to kill a few afternoons unlocking the secrets of the toxic city.