Skip to content
Home / Delve into the Depths in the Kobold Blog / Tournaments: The Labyrinth 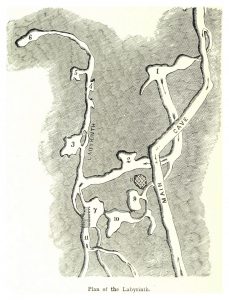 There may be no honor among thieves, but there is infamy. Names like Arnault the Razor, Light-Fingered Calence, or the Token Taker inspire respect and no little amount of fear. What many of the great thieves, dreaded enforcers, and even the rumored assassins that lurk in the darkened corners of the world share, though, is that they survived the Labyrinth. This shadowy event, which is difficult even for the well-connected to find, is the ultimate test of speed, wit, skill, guile, and sometimes even a participant’s viciousness.

What Is The Labyrinth?

The Labyrinth is a series of challenges that competitors must overcome, but the exact nature of the challenges shifts from one year to another. However, anyone navigating the Labyrinth has to deal with death traps, feats of acrobatic skill, shifting terrain, puzzles, and potentially deadly creatures. It is not a tournament for the faint of heart, and more than a few overconfident rogues walked in but never walked out again.

One of the greatest obstacles regarding the Labyrinth is that it changes every time it’s held. One year it may be held in the ruins of an abandoned city, and the next it might be held in sewer tunnels closed off for a dozen years. The next challenge might be set among the rooftops and sky ways of the city’s spires, and after that, it might be in a cavern crafted specifically to test someone’s skills in a dark, cramped place. The rules may vary from one year to another, as well. Some years, participants may be allowed to bring whatever weapons and armor they want while other years participants will be given all the gear they’re allowed to use before entering, leaving them with nothing but strength, skill, and in-born power. You never know what the Labyrinth will be until you find yourself standing in front of it.

As if the sheer difficulty of navigating a dangerous dungeon wasn’t enough, the Labyrinth is also a timed challenge. So participants not only have to dodge across spiked pits, avoid snares, sneak past hungry predators, and keep their footing on changing surfaces, but they have to do it faster than the last person did. Often, this leaves competitors with the unfortunate choice of playing it safe—and making it out in one piece—or trying to make good time and risking disastrous mistakes.

Who Participates in the Labyrinth?

Low tavern legend says that the Labyrinth was first conceived as a way to settle disputes between thieves’ guilds. Rather than risk open, bloody war over territory or compete in meaningless duels, a test of skill was set forth as an arbiter. As time went on, though, and the guilds learned there was profit to be made with violence, the Labyrinth became more of a spectacle. It was one part blood sport, and one part recruitment tool. It gave persons, and sometimes groups, a chance to show of their true skills by beating challenges in creative and unusual ways.

Creativity really is the key because once someone is inside the Labyrinth, there are no rules. Kain Blackfoot, a savage whose climbing skills had made him an unparalleled burglar, ran straight through the Labyrinth, ducking, dodging, weaving, and leaping to avoid traps and obstacles. He combined his dexterity with brute force, shouldering through doors even while diving beneath the poisoned darts that flew at his face. Harlan Raines, who’d made his living raiding ancient tombs, used a combination of spelunker’s tricks and stolen spells to bypass danger, creating a solution that was more than either skill or sorcery could provide alone. Stranger participants, like the Gray Woman, relied on abilities that weren’t human to pass through the dangers as if they weren’t even there.

The Labyrinth in Your Game

Where the Labyrinth fits in your game depends on what you as the GM are hoping to get out of it. For example, you could run the party through the dungeon as they try to make the best time (or at least a competitive time) in order to win infamy and recognition. Perhaps your party is simply trying to find out where the Labyrinth is going to be held this year, so they can pass word on to their employers. Maybe they have to mingle with the crowd in order to deliver a package or a message to one of the participants who simply can’t be located any other time of the year.

It may even be possible for your party to stumble upon the Labyrinth by accident. If that happens, they might be forced to make a run through it in order to win the freedom to be allowed to leave again. If your party needs to make some friends or impress some very shady people, there’s no better way to do it.

For an adventure to add the Labyrinth to as a side quest, check out Wrath of the River King.