Skip to content
Home / Delve into the Depths in the Kobold Blog / The Lost City for 4th Edition D&D is here! 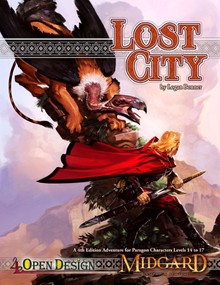 In the grip of malaria during a trade expedition to the jungles of the South, our kobold mascot Jiro had a vision of a mysterious city which once flew among the clouds, but is now buried in the desert. We told him it was just a dream, but he wouldn’t listen. He insisted we contact game designer Logan Bonner – the one person, he said, who could locate the legendary Lost City of Kadralhu.

Now Jiro’s packing his bullwhip and fedora for a trip into the Ishmai desert, because Logan and his crew of patrons came through: Lost City, a paragon-tier adventure for 4th Edition D&D, is now available in the Kobold Store!

But Logan warns that there are others who seek Kadralhu. Forged in the brutal furnace of primordial Chaos, the sand giants burn with a passion for warfare as hot as the searing deserts and arid wastelands they call home. The elements of air and fire course wildly through their veins, stoking their bloodlust…

In Lost City, characters of levels 14 to 17 explore Kadralhu, a city beneath the sands. There they will contend with those who dwell within it, as well as a rival faction that wants to seize the city’s ancient power for its own. The fate of Kadralhu – and possibly the world – rests in the party’s hands.

The city contains threats, treasures, and curiosities in equal measure. Between the start of the adventure and the final conflict, the characters can explore freely, unraveling the mystery of the city and finding its various factions, peoples, and monsters. GMs can bring the adventurers to Kadralhu in the course of an ongoing campaign or by using the adventure hooks provided. Once they enter the city, they’ll find ruins sealed off from the outside world for centuries and can explore some or all of the habitable areas of the city, in any order.

What seems to be a small ruin protruding from the endless sands is actually the topmost level of Kadralhu’s tallest surviving tower. Its interior offers access to the buried city below, for those who can pass the hazards of the descent. Are you ready to descend into Kadralhu and face its ancient guardians? Pick up Lost City in the Kobold Store today!

4 thoughts on “The Lost City for 4th Edition D&D is here!”