Skip to content
Home / Delve into the Depths in the Kobold Blog / Prepared! The Marrow Mines 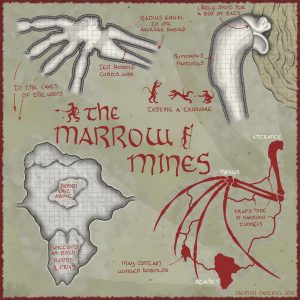 I was taken by the evil dogs while camping near Agav’s bog. They dragged me into their lair, and it wasn’t until I escaped that I knew the truth of the place: a great and bony wing buried in the side of a hill. They chained me in the dark with a candle made from foul wax and forced me to dig at the marrow. Their bonds were poorly made, and I fled several days later while they slept. What purpose did they have in mining that marrow? I cannot say…

The Marrow Mines is an explorable fifth edition location designed to challenge 1st- to 2nd-level characters. This article does not specify the number of enemies in any given encounter; tailor the numbers to suit the challenge level you wish to create.

The Marrow Mines are dug in and around the wing of a dead leviathan. A small pack of kobolds live and work in the mines. The mines are heavily trapped. The kobolds defend the area fiercely, and patrol the region around the mine. At night, a handful of urds make aerial surveys of the territory. The urds live in the deep reaches of the wing’s tips. The pack is led by Rikir, a large and brutish specimen who lost an eye in a fight with some nearby goblins. Rikir is responsible for the cunning traps dispensed throughout the place.

The marrow from the wing is an addictive substance for the kobolds, and some have been altered by long-term use. In addition to Rikir, one in five of the kobolds encountered in the mines have gained the following:

Visions of the Leviathan. Staring into the kobold’s eyes you are suddenly falling through a nightmarish stormscape; a dread leviathan wings through the rain and lightning—what evil do you see—lost between worlds? Recharge (6), all enemies within 30 ft. make a DC 10 Constitution save or are frightened for 1 round.

Consuming the marrow causes horrific visions of storms and malevolent leviathans winging their way through the skies. PCs who consume the marrow must succeed at a DC 14 Constitution check to avoid being paralyzed for a day. Paralyzed PCs can attempt the save again every hour. At the end of their paralysis, the PCs discover they can read, write, and converse in the draconic tongue. This effect ends after five long rests.

Centipede Pit. Falling suddenly, you land on uneven ground. Struggling to rise, a skittering horror passes quickly over your foot. The pit trap consists of a well-disguised false floor covering a 10-ft. drop into a pit. Three giant centipedes attack anyone falling into the pit. Discovering the false floor requires a DC 12 Wisdom (Perception) check. PCs can skirt its edge with ease.

Box of Bats. A slight drag in your step and the audible snap of a tripwire sends a shiver down your back. From the darkness comes a growing cacophony of leathery wings. The box of bats trap consists of a cleverly hidden tripwire that releases a swarm of bats from a wooden cage 20 ft. above. The bats attack anyone in the passageway. Discovering the tripwire requires a DC 12 Wisdom (Perception) check. The tripwire can be stepped over (no roll required) or disarmed with a DC 10 Dexterity (Sleight of Hand) check.

The shoulder joint of a massive wing protrudes from the side of a hill. The bone has been hollowed out into a makeshift tunnel; the osseous walls, floor, and ceiling are covered in strange smudge paintings depicting canine-like humanoids. Piles of bones and broken tools lie in heaps outside the entryway.

Of all the areas in the mines, the entry is the most likely to be trapped. In addition to the previously described traps, the entry is guarded by kobold sentries. Unless great care is taken to eliminate the sentries using stealth, they alert the warren to the presence of intruders via whistles that, when blown, emit a single eerie note. A DC 12 Wisdom (Perception) check reveals a silver bracelet (5 gp value) amidst the remains. A secret tunnel is found with a DC 15 Wisdom (Perception) check. The tunnel exits deep in the reaches.

The tunnel widens into a large irregularly shaped chamber. Crude pots of crimson-colored soil line the eastern wall. A smudge painting depicting of a massive winged creature dominates the room. A number of nest-like beds lay scattered on the earthen floor.

In the likely event that the kobolds are aware of intruders in their warren, they fortify their living quarters at the wing’s nexus. Several kobolds take half cover position near the entry to the nexus and fire slings as the PCs approach. Rikir and two kobold guards take half cover positions at the back of the chamber and fire their slings when the PCs pass the entryway. Once the PCs have reached the room, all remaining kobolds engage in melee and attempt to block the PCs from moving on Rikir and his guards. The marrow in the pots is magical and a DC 10 Intelligence (Arcana) check reveals it is likely dangerous to consume. There are 40 sp stashed around the chamber.

The tunnel narrows until you must crouch to continue. At the end of the bone tunnel, you discover an opening into a large cavern. Piles of excrement sit on the floor, and shuffling noises sound from the darkness above.

The wing’s tips extend deep into the ground. A cluster of urds live in the deep reaches of the wing, and they keep their distance from the rest of warren. The urds have dug caverns that intersect with the wing, and they perch high in the shadows where they drop stones on interlopers. They do not consume the marrow. A search of the cavern and successful DC 12 Wisdom (Perception) check reveals a 5-ft. long feather from the wing preserved in the soil. It radiates evil and is worth 25 gp.

9 thoughts on “Prepared! The Marrow Mines”