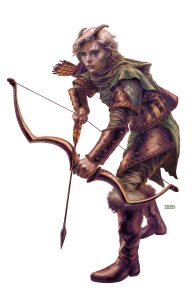 If you’re curious as to what you can build using the new Midgard Heroes supplement, take a look at this sample fifth edition character. (We’ll have another one for you soon!)

I don’t trust others easily. I know better than most that looks are deceiving.

I feel more at home in dim, enclosed spaces.

Survival. If the evil that follows me can help me endure, I’ll use it to my advantage. (Neutral)

A powerful creature of darkness gave me a command, and I will work to fulfill it to secure my reward.

A powerful warrior of light believes I will bring great darkness into the world, and has vowed to stop me.

Other Proficiencies and Languages

Background Feature — Touch of Darkness. Fiends, dark fey, and undead might be willing to talk to you instead of attacking, at least long enough to bribe or convince them to leave you in peace. Sometimes creatures of darkness seek you out whether you want their attention or not, and it may be difficult to secure the trust of good creatures who are aware of your nature.

Path of Shadows (2/day). When in darkness, dim light, or a shadow large enough to cover your body, you can cast the misty step spell. You can use this ability a number of times per day equal to your Charisma modifier (minimum 1), and you regain all expended uses when you finish a long rest. Charisma is your spellcasting ability for this spell.

Traveler in Darkness. You have advantage on any Intelligence (Arcana) check to learn about a particular fey road or shadow road and how it functions.

Kaylassa is a dusky-skinned shadow fey with silvery hair. Her eyes are dull gray, and rarely register any emotion. She wanders Midgard from town to town, seemingly just one of many mercenaries selling her bow and skills for a living.

The truth is much more sinister. Kaylassa is an agent of the Winter Court of the shadow fey. Specifically she is a pawn of the Moonlit King, and she walks Midgard to find an unfortunate soul the king wants killed. The black moonstone she carries leads to her prey, and it will capture the poor wretch’s soul for transport back to the king when Kaylassa carries out her grim task.