Skip to content
Home / Delve into the Depths in the Kobold Blog / Midgard Heroes: Kobolds

Of the smaller races, the kobolds have adapted best to the changing world. Enslaved long ago by reaver dwarves, kobolds quickly carved a niche for themselves as miners, scouts, and tinkerers: small enough to be useful, and also small enough to be dismissed as a threat. At first they were tolerated, then largely ignored. As a result, the shadows of dwarven society are rife with kobold rogues and entrepreneurs (many of them secret worshippers of Loki), seemingly subservient but busily trading dwarven goods for resources extracted from the dwarves’ own mines and storehouses, right under the noses of their “masters.”

Free kobolds defend their mines viciously but otherwise maintain the ruse of a harmless and subservient little folk—at least until the opportunity to sheathe a knife in someone’s kidneys presents itself.

Many other small races have adopted the kobold’s strategy, including the worship of Loki, embracing his cunning ways and the advantages of guile and cunning over brawn and bravado. 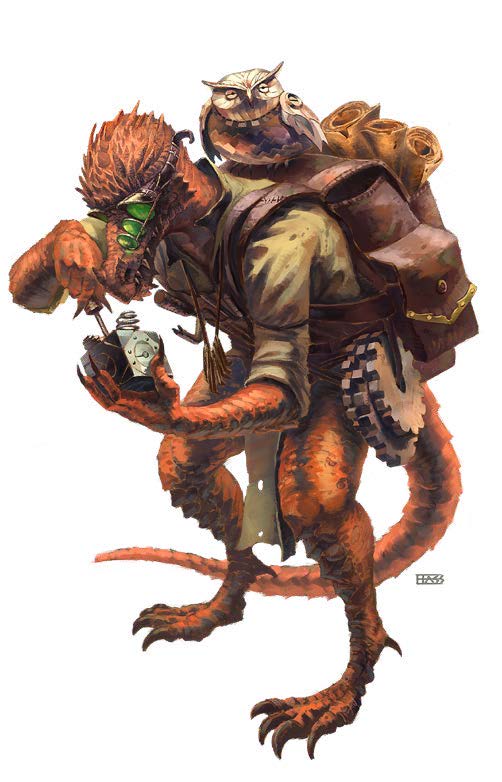 More than anything, kobolds are survivors. Their scaly skin and keen night vision as well as their dextrous claws and sensitive snouts make them quick to sense danger, and their clawed feet move them out of danger with cowardly speed. They are small but fierce when fighting on their own terms, and their weight of numbers helps them survive in places where larger but less numerous races can’t sustain a settlement. They are great miners, good gearsmiths, and modest alchemists, and they have a curiosity about the world that frequently gets them into trouble. They are merchants to both the surface world and the world beneath it, with their greatest cities hidden deep below the earth. Their enemies are the diabolical gnomes, the dwarves, and any other mining races that seek dominance of dark, rich territories.

The kobold King of Kings rules from Harkesh, the capital of the Dragon Empire, where kobolds form a large middle class known as the kobaldi. Some even own human and dwarven slaves. Here, kobolds carry themselves upright, see themselves as naturally superior to the hairy races, and swagger about their business. Mharoti kobolds loudly demand the respect of others and greatly disconcert those accustomed to the paranoid and sniveling kobolds found in the rest of Midgard. That same sniveling still goes on, but the kobaldi reserve it for their dragon masters.

Kobold society is gregarious and built around the clan, matriarchal lines of descent, male kings, and the crucial importance of clutch-mates (those who hatched about the same time, the closest things kobolds have to brothers and sisters). Few kobolds become adventurers, and most of those who do have either offended a kobold king (and been exiled from the mines as punishment) or have lost many or all of their clutch-mates (so they leave home to grieve and to find new friends). In many cases, a kobold “adopts” an adventuring party as new clutch-mates.

Kobolds are deeply enamored of their tools. Some kobolds spend a great deal of effort improving them. Mining picks, a mason’s hammer, jeweler’s loupe, and even simple items like a kobold’s spear or dagger are all named and cherished. At the same time, kobolds tend to gnaw on tool handles, forget to oil blades, or even pry out inlays or decorative gems (to polish or reshape them) without first considering how they’ll repair the damage. As a result, most kobold items are distinctive and unlikely to be mistaken for anyone else’s items. Some believe this decorative urge is an instinctual defense against theft.

One category of tool deserves special note: traps. Kobolds create simple, deadly traps and wildly impractical ones as a hobby. Few kobolds leave home without string, springs, simple latches, and other bits and pieces that can be quickly fashioned into triggers for traps. Kobolds are the only race that recognizes “trapsmith” as a profession.

Kobolds are closely allied with and related to dragonkin, drakes, and dragons. The kobold kings (and there are ohso- many kobold kings, since no kobold ruler is satisfied with being merely a chieftain) admire dragons as the greatest sources of wisdom, power, and proper behavior.

Among themselves, kobold names tend to be a combination of yips, howls, snarls, coughing sounds, and sounds made by clacking their teeth. These words are difficult, if not impossible, for other races to duplicate, so kobolds who go out into the world usually adopt another, simpler name. These can be anything the kobold likes the sound of, and often come from another culture; some kobolds are partial to dwarven names, for example, mainly for ironic reasons. Alternatively, they can take descriptive labels, usually with an incongruous gravitas or a ridiculous implication of power, such as Worldshaker, Thor Giantslayer, or Spinecrusher. There’s no real consistency or pattern to the names they use among outsiders.

Your kobold character has certain characteristics in common with all other kobolds.

Age. Kobolds reach maturity at age 10, and can live to nearly 80.

Alignment. Kobolds are organized and tend toward law, particularly those who practice a trade. Whether they lean toward good or evil depends on their draconic lineage.

Size. Kobolds stand between 3 and 4 feet tall, and weigh around 40 pounds. Your size is Small.

Speed. Your base walking speed is 30 feet.

Blindsider. You have advantage on your attack roll against an enemy within 5 feet of you if you have an ally that’s not incapacitated also within 5 feet of the target. You can apply this bonus to one attack per round. Sunlight Sensitivity. You have disadvantage on attack rolls and on Wisdom (Perception) checks that rely on sight when you, the target of your attack, or whatever you are trying to perceive is in bright sunlight.

Tinkerer. You have proficiency with artisan’s tools of your choice: alchemist’s supplies, mason’s tools, smith’s tools, or tinker’s tools.

Languages. You can speak, read, and write Draconic and Common.