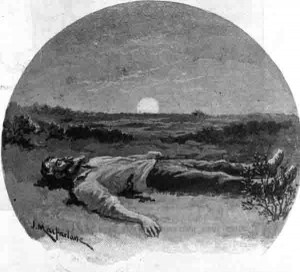 By paragon tier, PCs have made it out of the neophyte stage and are professional adventurers. They walk with a confident strut, and their words carry the weight of experience. However, one thing always gives away an accomplished adventurer: the numerous scars.

In fantasy games, wounds are often a transitory condition, represented through the abstract concept of hit points and lasting only as long as it takes the party cleric to get warmed up. Yet, after dozens of sword fights, falls, spell damage, and general calamity, it seems unbelievable, even with the benefit of magical healing, that all those wounds don’t leave a permanent mark…

The following wound feats help more realistically portray the hazardous nature of an adventurer’s life. Each can be selected any time a character normally gains a feat.

The prerequisites are suggested for verisimilitude and can be considered optional. Instead of requiring massive trauma, a wound feat could be the result of minor but repeated damage. The GM has final say when and how a character may take a wound feat.

Though they are built with paragon tier in mind, wound feats are also a good way to develop a PC’s background. The GM might allow a character to take one of these feats at 1st level, reflecting an earlier experience.

For example, a player could choose the Burns feat for a PC, reflecting a mercenary attack that torched the PC’s home. It would explain anything, including the PC’s loyalty to a particular religious group and a sadistic streak when fighting sell-swords.

Prerequisite: Must have suffered a critical hit from a battleaxe or heavy blade or taken a single hit that causes 50 or more hp damage

Benefit: A massive injury removed a portion of your body that never regrew. A depression marks where the flesh once was. This empty space grants you the ability to wear one additional neck or waist slot magic item.

The damage has permanently impaired your health. You take a -2 penalty to Fortitude defense.

Prerequisite: Must have suffered a critical hit from a flail, mace, war hammer, battleaxe, or heavy blade

Benefit: A blow to the head has impaired your ability to think clearly. As a side effect of your lost reasoning capability, you gain a +2 feat bonus to defense against attacks with the Psychic or Fear keywords. Your slower brain also means you take a -2 penalty on all Intelligence and Wisdom skills and checks.

Prerequisite: During the course of a single day, you must have suffered fire damage equal to at least 1/3 your total hp

Benefit: Injury from fire has destroyed the nerve endings in your skin. Your lost sensitivity grants you resist 3 to all attacks that target your AC or have the weapon keyword.

You also gain a +2 bonus to Endurance checks to resist extremes of environmental heat and cold. You take a -4 penalty on all Charisma-based skills and checks.

Benefit: You have been in so many fistfights and brawls, your appearance is permanently marred. Others recognize your disfigurement as the mark of a fighter. You gain a +5 feat bonus to all Intimidate checks. However, you also take a -2 penalty to all other Charisma-based skills and checks.

Benefit: You have a hard time sleeping from the nearly constant pain of old injuries. This makes you a light sleeper. You only take a -3 penalty to Perception checks while sleeping.

Additionally, you receive a +2 bonus to saving throws against sleep effects and the unconscious condition. You only benefit from an extended rest after 8 hours, instead of the usual 6.

Benefit: The finger joints of one hand no longer work properly, and your hand resembles a hook. Because of your stiffened finger joints, you gain a +5 feat bonus on Climb checks.

However, this hand imposes a -2 penalty on Thievery checks made to disable a trap, open a lock or perform a sleight of hand trick.

Benefit: An earlier leg injury has given you a permanent limp. Your hobbled movement makes you seem less threatening. You gain a +5 feat bonus to Bluff, Diplomacy and Streetwise checks. You take a -1 penalty to speed.

Prerequisite: Must have suffered damage from a fall of at least 30 ft.

Benefit: Falls and trips have loosened your shoulder joints, making them more flexible but also increasing the chance of dislocating your shoulders. The pliancy in your shoulders grants you a +5 feat bonus to Acrobatics checks to escape a grab or other immobilizing effects, as allowed by the GM.

Whenever you employ this bonus, you take a -2 penalty to melee attacks and Strength-based skills and checks for 1d10 rounds.

Prerequisite: Must have suffered a critical hit from an arrow, bolt, light blade, or spear

Benefit: You are missing an eye from a past fight. Your limited ranged of vision grants you a +4 feat bonus to defense against gaze attacks and charm effects based on vision. However, you also take a -2 penalty on all Perception checks and ranged attack rolls.

Prerequisite: Must have suffered a critical hit from light or heavy blade, war hammer, mace, or battle axe

Benefit: You have lost one or more fingers from one hand. Because of your handicap, you have taught yourself to cast spells with increased speed and efficiency. You may use one available arcane power 1/day as a free action or an immediate reaction.

However, speed comes at a price. When you roll a 1 on any arcane power attack roll, you become the spell’s target and take damage as if the spell hit you.

Prerequisite: Must have suffered a critical hit from a light blade, arrow, bolt, or spear

Benefit: A deep stab wound penetrated one of your lungs, destroying it. You gain a +2 feat bonus to defenses against inhaled poisons, spores, gases, and dust. However, your decreased breathing capacity means you take a -2 penalty to Endurance checks when deprived of air.

Prerequisite: Must have suffered a critical hit from hammer, mace, or flail

Prerequisite: During the course of a single day, you must have suffered damage from lightning equal to at least 1/3 your total hp

Benefit: Electrical damage has permanently damaged your nervous system. You have a difficult time holding still, and sudden noise or movement makes you flinch uncontrollably. You gain a +2 power bonus to Initiative and +1 power bonus to AC, but a -2 penalty to all Dexterity-based skills and checks.

The spasms also cause others to perceive you unfavorably. You take a -2 penalty to all Charisma-based skills and checks.