Skip to content
Home / Delve into the Depths in the Kobold Blog / Midgard Icons: The Dragon Sultana 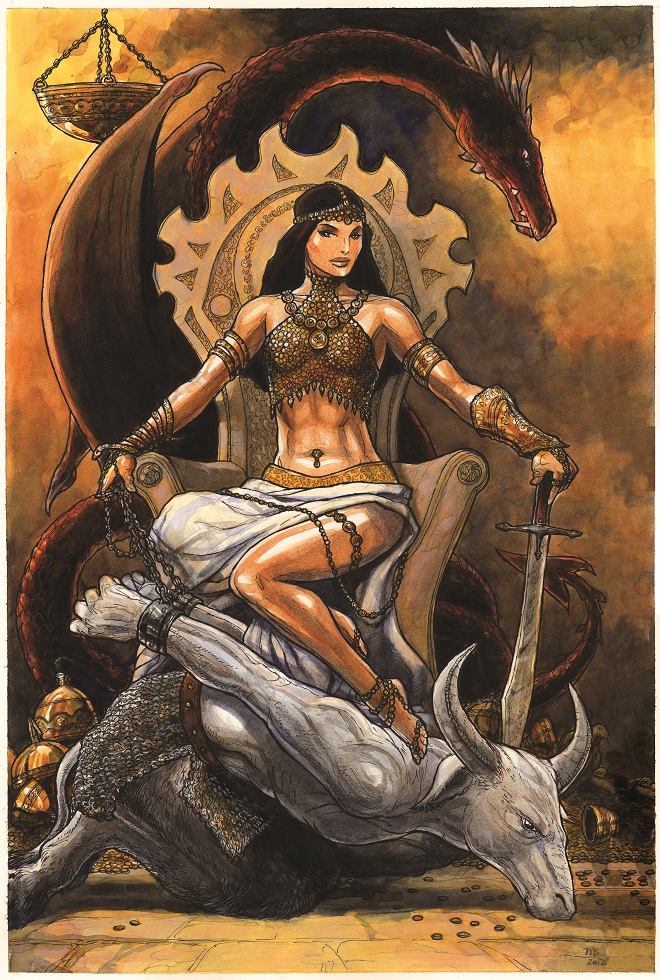 In our sixth installment, we journey to the greatest empire in Midgard, where we walk past unimaginable opulence — and heavily armed dragonkin — toward an audience with…

The Dragon Sultana’s rule is new and fragile, but she has the confidence and the ruthlessness needed to command the mighty draconic Mharoti Empire.

“I rule in the name of the Scaled Lords, in the name of Mharot and Veles. To stand in my presence is to stand with the coils of the World Serpent about you.”

In the Golden City of Harkesh, at the Imperial Palace of the Eight Elements.

The vastly powerful Mharoti Empire was founded by dragons and is run by dragons for their enrichment. It is one of the few places where humans and their kin are distinctly second-class citizens, though there is one notable exception: The dragons choose not to appoint one of their own to rule the empire. Their vanity was such that they could never agree on a dragon ruler, so they gave the job to a clearly inferior species instead. The Empire is ruled by a human sultan or sultana, who loosely holds the reins of power.

The charismatic, 26-year-old Dragon Sultana Casmara Azrabahir stands a mere 5 feet tall but radiates the aura of command that one would expect from the ruler of the world’s mightiest empire, whose position is backed by dragons. She is a skilled sorcerer whose color-streaked black hair confirms her Chromatic Destroyer Heritage — and she has been known to exhibit the creature’s foul temperament, as well. The Dragon Sultana can also fascinate dragons and dragon-kin with her voice.

Most adventures that involve the Dragon Sultana also involve the affairs of dragonkind, from kobolds to dragonkin to drakes. Those that involve the Great Dragon Lords themselves are the most dangerous and most lucrative. Adventurers may be recruited by the Dragon Sultana or her organization to help resolve issues of nesting rituals, peculiar forms of status or insult, or assassination of seemingly inconsequential personages — or they may become embroiled at the highest levels in court intrigue or even a naked power grab.

The Glittering King pays loyal tribute to the Dragon Sultana, and she has given private audiences to Baba Yaga of late — though none know what they might be planning.

The Dragon Sultana’s plans for imperial expansion include control of the seas, and First Duke-Admiral Cadua of Triolo is determined to see that she doesn’t get it.

Two years ago the young Sultana Casmara Azrabahir murdered her weak, dragon-bloodless uncle Sultan Abdrazin Azrabahir and assumed control of the Empire. The sultan’s elite palace guards—the Order of the Wyvern—fell quickly in line, not questioning her usurpation, but some dragons, drakes, and emirs are still squabbling about whether to stand for or against the new order. The sultana has powerful allies within their ranks, and so has turned her attention away from possible coups and toward expansion.

If the Dragon Sultana didn’t exist, the Mharoti Empire would not be an empire—it would more closely resemble eight draconic kingdoms at war. The young Sultana Casmara has a great deal of power, but only because the governors don’t trust any of their own number with that much authority. And yet, she plans effectively and commands the imperial legions and the morza (a draconic term that translates roughly as “prince” or “dragon governor” or “great lord”). The threat of swift, silent death at the hands of the Dragon Sultana’s harem assassins is usually enough to keep dragonkin and human satraps in line.

The Dragon Sultana has had little time to enjoy the privileges that come with her role, but rumors swirl that the Royal Harem might soon see a swath of handsome male consorts.

Everything will be all right as long as the Dragon Sultana cannot achieve her goal of conquering Nuria Natal and plundering its ancient secrets.