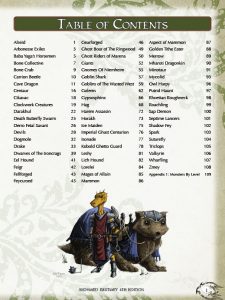 We hit our funding goals for the Midgard Bestiary for 4th Edition! Thanks go to everyone who kicked in on this project. Now, since we have many days left in this project, let’s take a look at the Table of Contents (as they stand right now) so that those of you who haven’t yet backed this project know what you’re missing as of this posting. (Click on the image for a larger version.) You can also see a couple of previews of what’s in the book over on the Kickstarter site, and we’ll link over to those for you. But, before we get to that, get into the head of designer Brian Liberge by reading his design diary.

You’ll discover many interesting creatures within Midgard. When selecting monsters for the 4th Edition bestiary, we had five years of Kobold Quarterly history at our disposal. The end result is an incredible menagerie featuring selections from nearly everything the kobold scribes have printed.

The Goblins of the Wasted West stick out in my mind as something I wanted to work on. Long before the bestiary was a live project, patrons of the Midgard Campaign Setting were discussing different goblin tribes that formed in the shadows of the Old Ones. One talented patron even began sketching some incredible images. That was all it took to hook me. These goblins were destined for my game table. I began writing example members of each tribe, and I continued to come up with ideas once the book got the green light. Not all the tribes I worked on made it into the final product. The Scarlet Rovers, for example, were eventually cut. These master warriors would have broken the mold on how mighty a single goblin’s martial prowess could be. The tribes that made into the bestiary, though, should do well to twist the traditional goblin on its head. We kobolds love flipping goblins.

One of the tribes that did make it is the Ghost Goblins. These goblins take reverence of their dead to a new level. They don’t just worship their ancestors; they raise them up to continue to fight for the tribe. Our representative of the tribe is the Ghost Goblin Horror. This grisly goblin did not fall in battle, but rather devoted itself wholly to the tribe’s strange gods and the veneration of undeath. Eventually this practice takes its toll and a horror is born, a being torn between life and undeath. With but a glance, it can creep inside its enemy’s mind, curse it with thoughts of its own death, and force its target to become paralyzed with a false rigor mortis. Hardly a hero’s death, since the rest of the tribe leaps at your stunned form. 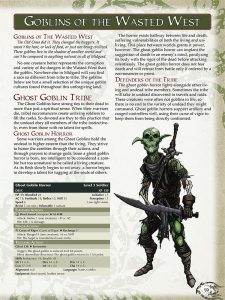 As a low-level soldier, it’s the Horror’s job to lock down opponents. Instead of using a traditional mark, its curse of rigor ability allows it to immobilize a target that’s within 5 squares. It can then close in to melee a new target, trying to keep two foes engaged. These creatures can make a powerful pair with artillery and controllers by keeping melee heroes at a safe distance. They can even work as a melee leader, fighting at the front of a pack of zombies and goblin skirmishers.

Now for those links we promised, but first, a special shout-out goes to game designer extraordinaire Rob Heinsoo, who became a backer for this project recently.

Now, we invite you to take a look at those stretch goals. As of this writing, the first stretch goal is within reach. For convenience, here they are:

The Bestiary adds 8 pages to every backer’s version of the final project, adding more monsters and art at the same pledge levels. Yes, you just get more!

All backers get the Iron Secret adventure using monsters from the book—AND a set of newly-commissioned, full-color PDF battle maps for the adventure! Suitable for online play or printing out to slap down on the table, your choice!

If you haven’t yet kicked in, please do consider doing so over on the Kickstarter site! A slew of 4th Edition monsters await inclusion in your game.