Skip to content
Home / Delve into the Depths in the Kobold Blog / Monsters of Sin for Pathfinder: Avarice 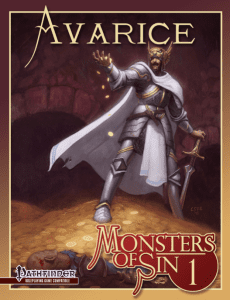 “You kill those who stand between you and your goals. You strive to pull down the mighty, and usurp their power. You plunder ancient tombs and spend your coin on the pleasures of the flesh. Tell me, Pathfinder: will you be able to stand against the Monsters of Sin? Or have you already fallen to them?”

Of all humanity’s sins, seven are recognized as being truly deadly. Challenge your players’ PCs with their corrupting influence – subscribe to our new Monsters of Sin  PDF series for Pathfinder Roleplaying Game or pick up each new volume separately. (The subscription’s a much better deal.)

Speaking of deals, the first book in the series is devoted to Avarice: the insatiable lust for wealth. Here’s what it has in store for the unwary…

• The Hoard Golem, guardian of treasure, born from the paranoia of dragons.

• The small but deadly Map Mimic—bane of dungeon dwellers!

• The golden Midasites, fey creatures with an invaluable talent.

• The embodiment of Avarice itself, a colossal outsider with gleaming armor and filthy fur.

• Details on Avarice within the Midgard Campaign Setting.

• Rules for incorporating Avarice into your NPCs and monsters.

Whether you’re running a Campaign of Sin, or just want to add a little greed to your game, Monsters of Sin: Avarice offers a wealth of possibilities! Buy this 10-page PDF on its own, or subscribe and save.