Skip to content
Home / Delve into the Depths in the Kobold Blog / Howling Tower: Gangsters Have Much to Teach Us 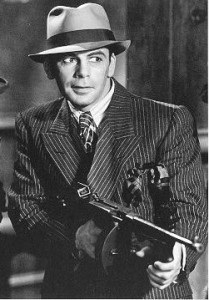 The best roleplaying sessions I ever played were a GangBusters campaign run by the game’s designer, Mark Acres. This campaign was legendary around TSR. Everyone wanted in, so Mark routinely wound up handling twelve or more players at a time. Understand that GangBusters is a tabletop version of simple, straightforward cops and robbers set in the 1920s. There are no urban arcana-style Elf Capone bootleggers backed by thuggish ogre torpedoes, no private investigators who mix tough talk with magic, no cosmic horrors lurking at the threshold of reality; just crooked cops, honest G-men, brutal racketeers, and intrepid newspaper reporters.

With such diverse characters, GangBusters doesn’t run like D&D. Characters don’t form into a cohesive adventuring party pursuing a single goal. Everyone has his or her own agenda. Gangsters want to set up a criminal empire, bribe politicians, and amass a fortune in dirty money before winding up in the can or a coffin. FBI agents and the police want to pinch the criminals without getting too dirty themselves. Newspaper reporters want to blow the lid off all that crime and corruption without getting themselves clipped from both sides. Private investigators want to scratch out a living without getting set up, framed, and sucker punched too often.

The magic of this campaign was that all these players could follow their own leads, scheme their own schemes, and generally work at cross purposes to each other while sitting in the same room, vying for one GM’s time, without the whole show collapsing into chaos and spite. Part of that was because we were all experienced roleplayers who willingly submitted to being manipulated, but mostly it was because Mark was the Marconi of GMs. Under his direction, individual plots rose and fell like sine waves on an oscilloscope, diverging on their own frequencies until Mark slowly brought everything back into phase. Then everyone would find themselves outside the same speakeasy just as the biggest gang war, con job, blackmail racket, and bootleg raid in Lakefront City history were about to hit the fan.

Mark’s handling of that campaign put some key game-mastering techniques on display. Here are a few of the tricks that he employed so adroitly.

ABC—Always Be Conniving. Always listen to the players, even those who don’t currently have center stage. Just as we got to hear everyone else’s plans, Mark got to eavesdrop on ours. Unlike us, who endeavored not to use out-of-character knowledge unfairly, Mark was under no such compunction. Maybe he had more of this campaign planned than he showed, but he made it look seamless and effortless. Having an encyclopedic knowledge of the genre to draw on at a moment’s notice certainly helped.

This joint is jumping. With so many players operating independently, it’s essential to keep people occupied. Mark continually shifted his focus from one team to the next, giving each 5 to 10 minutes of attention before leaving them with a cliffhanger and jumping on to the next group. No one was left with nothing to think about when the attention shifted away from them. There was always a fire burning and no extinguisher in sight.

Victory is fleeting. The enemy is always in motion. Because the GM knows all, the enemy is also more agile and more clued in than the characters would like. Criminal (or law enforcement) masterminds who rebound from every setback are stock in a pulp setting such as GangBusters, where the action is expected to rise and fall with every tick of the clock. They can be equally at home in a drow enclave, a haunted forest, or a space station.

Red herrings are fecund and create many crossbreeds. Complex story twists intended to throw characters off the scent don’t need to be devised beforehand. Players generate more than enough red herrings on their own.

Willing suspension of knowledge is a powerful ally. Players deserve more credit than they sometimes get for being willing participants in their own undoing. They’ll knowingly stick their hands right into a fire—IF they trust the GM to make high theater out of burning them. Once that trust is established, the sky’s the limit on how high the game can rise.

We have met the enemy, and he is us. The GM can never be as wily or as entertaining a foe as other players. Player-to-player rivalry is hard to arrange in a party-oriented, D&D-style game. It’s the meat and potatoes of a setup such as GangBusters, where the GM can spend more effort holding player groups apart until the moment is right for them to clash, than in bringing them together. Given half a chance, players will dig each other’s graves with ghoulish glee. If the funeral is handled deftly, they won’t even mind being buried alive.

3 thoughts on “Howling Tower: Gangsters Have Much to Teach Us”