Skip to content
Home / Delve into the Depths in the Kobold Blog / Book Review: The Silver Skull 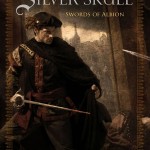 Introducing Will Swyfte, who has earned the descriptors of spy, adventurer, swordsman, rake, swashbuckler, wit, and esoteric scholar. His exploits against the forces of Spain have made him famous, which isn’t exactly good for a spy. But Swytfe’s above-the-covers, undercover life has been made public to give the people of England hope. He is a decoy that distracts people from his masters’ real work. Spain and England are on the brink of war, and elements of Faerie have chosen sides. Dr. John Dee has erected magical defenses for England and created strange gadgets to be used by spies like Swyfte—he’s a kind of old-school Q. In this book, little is as it seems, and the war needs only a spark to turn from hot to cold.

I really enjoy alternate historical fiction, and when it is done like The Silver Skull, I feel like it is Christmas in July. This book takes place in a time period that I, as a Yank, know about but am not familiar with. I have some knowledge of many of the characters such as Dr. John Dee and Will Swyfte, which added to this novel’s appeal. The cover art for this book was wonderful; it had the feel of an oil painting that one would find at the Louvre. The story does not hesitate to get its hands dirty with the action, and I found that the pace of this story kept up the intrigue. Mark Chadbourn intertwined some great backstory elements in with the over-the-top almost pulplike action while maintaining that British sensibility that so many of us across the pond have grown to love.

This book shows that even spies have some honor as well as a bit of chivalry. For me, these moments of chivalry just made things seem so . . . well . . . British. The small acts of chivalry contrasted against the less desirable things that Swyfte and some of his spying compatriots and counterparts had to do for Queen and country, and I really enjoyed this element. While Swyfte does show some emotions over the difficult decisions he has to make through the course of the story, the author never paints him out to be an overly noble figure that is above setting things on fire in the wee hours of the morning.

Thanks to the addition of some of John Dee’s inventions, Will Swyfte really does have the feel of a 15th century version of a well-gadgeted spy who likes his martinis shaken not stirred. Swyfte uses several of the inventions many times, so they aren’t fire-and-forget knick-knacks. While innovative, none of the gadgets are beyond the realm of belief nor do they venture into the steampunk realm. I loves me some steampunk, but this just wasn’t the place for it, and I’m glad that the author saw that.

Because this story deals with Faerie, magic is involved, and Chadbourn was very adept at incorporating the most popular myths about how their magic works. He even drew some English and Scottish folklore into the story without overdoing it. The magic he describes in this book feels right; it is subtle and insidious, which is just what I would expect from the Fair Folk.

I see two things about this book that I think could be improved. The first was the inordinately large number of actions that both the heroes and the villains seemed to be able to perform in a very short amount of time. I had to re-read some passages several times to make sure that the amount of activity that occurred in such a short span had actually happened. Situations like these create a wonderful pulpy feel, but there were a few times where I could have sworn that some of the characters went to “bullet” speed to pull so much off so quickly. The only other thing that was a minor problem was the time lapses between intense action and the next plot hook. In the author’s defense, he always explained these lapses, but when a character is involved in an epic battle and then wakes up a few days later, the transition is a bit jarring. Again, all these transitions (there were several) were well handled, but they were noticeable enough for me to comment on them.

I’m excited at the thought of reading more books in the Swords of Albion series; it is great to get to know a time in alternate history that not many authors tackle. I really enjoy the combination of swordplay, gun fights and Faerie magic. None of these aspects of the world were overplayed. In fact, Chadbourn once again proves just how skilled he is at spinning an intricate web of seemingly disparate elements into a very cohesive and intricate story that reads like the love child of a pulp dime novel and a complex spy novel—with a little magic thrown in for taste.