Skip to content
Home / Delve into the Depths in the Kobold Blog / Memoirs of a Lich: Gear 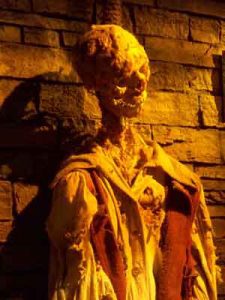 This is Osvaud. After thousands of years of murdering teams of well-outfitted adventurers, we’ve amassed quite the stockpile of junk. I am pretty sure we’ve got a closet somewhere so precariously stacked with portable holes and bags of holding that it unintentionally qualifies as a magical trap. At this point, anything we stumble into that’s less than a minor artifact isn’t really worth an identify spell, and that darn divination doesn’t even work on them in the first place.

Which brings us to today’s topic: gear. Undead aren’t immune to analysis paralysis.

I know it can be tempting to carefully evaluate what specific rings to wear and staff to carry or which shade of black best compliments the glowing red of our eyes. Don’t let your gear define you. Always remember that you are far more than the sum of your magic items.

You are also a big stinking pile of 9th-level spell slots and the ability to murder people with a high-five.

I bet you can’t even remember the last time you had to optimize yourself. Do you need to carry a staff of power?  What are you going to do with it exactly? We both know you basically only want one so you can see the look on a wizard’s face just before blowing him up with ridiculously expensive treasure.

Anyway, the whole concept of you optimizing yourself is silly. There’s a reason you don’t see red dragons wearing cloaks, vests, and armbands. It generally shows a lack of confidence in their basic awe-inspiring power—and clashes with the wings. Heck, it is a bit hilarious having nothing of real value on your person. That way if someone manages to take you out, they don’t even get the pleasure of looting your corpse. However, if we (for some reason) need to impress a bunch of dumb archmages, use this relatively simple outfit. I’m sure we’ve still got a few sets of this crap lying around somewhere.

Few things beat the reliability of a ring of freedom of movement or the versatility of a ring of three wishes. Getting locked down sucks, and if crap hits a fan out of nowhere, it’s nice to be able to alter the nature of reality. Then, a robe of the archmagi (in black or that sweet custom pink number we hemmed) rounds out a lot of the basic protective things. Of course, grab a staff of power. At that point, just throw on whatever random wondrous items are within reach and coordinate with your robe.

That’s enough magic items that you won’t look underdressed in a room full of epicly evil wizards. I swear most fell towers of eternal darkness might as well have a freaking dress code. While every single one of those gatherings is an incredible waste of our valuable time, we attend for that beautiful inevitable day when a dozen trigger-happy narcissists all retributive strike their staves of power at the same time and blow the universe a new black hole.

You just know it’d happen at the one meeting we miss.