Skip to content
Home / Delve into the Depths in the Kobold Blog / Shades of Magic: Artifacts of Primordial Power 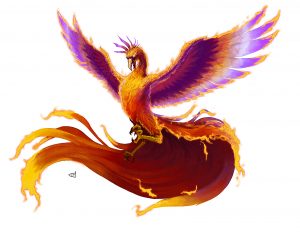 The raw power of elements is called upon by druids, evokers, and sorcerers alike, for what mage does not wish to command the natural world itself? Long ago, these great spell-binders tamed the elements and forced their primordial power into these arcane tools. Should you come to possess these great magical tools, be prepared to wield them against the enemies of the earth.

The earth itself shakes when you walk in these steel-toed boots. While walking, these boots cause harmless, but unsettling tremors. After you run at least 15 feet in a single turn, all creatures within 10 feet of you at any point during your movement for the rest of your turn must make a DC 16 Strength saving throw or take 1d6 force damage and fall prone.

Additionally, you may cast earthquake, requiring no concentration, by speaking a command word and jumping onto a point the ground. The spell is centered on that point. Once you cast earthquake in this way, you cannot do so again until next dawn. 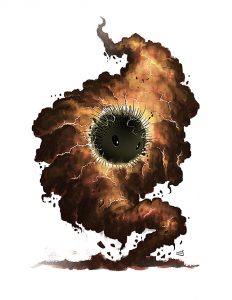 The metallic head of this javelin is embellished with three small wings. When you make a ranged weapon attack with this javelin, a swirling vortex of wind follows its path through the air. Draw a line between you and the target of your attack; each creature within 10 feet of this line must make a DC 12 Strength saving throw. On a failed save, the creature is pushed backward 10 feet and falls prone.

Additionally, if this ranged weapon attack hits, the target must make a DC 13 Strength saving throw. On a failed save, the target is pushed backward 15 feet and falls prone.

This plate armor was magically crafted from plates of interlocking stone, and tiny rubies inlaid in the chest plate of this armor create a glittering mosaic of flames. When you fall while wearing this armor, you can tuck your knees against your chest and curl into a ball. While falling in this way, flames begin to form around your body. You take half the usual falling damage when you hit the ground, and fire explodes from your form in a 20-foot radius sphere. Each creature in this area must make a DC 13 Dexterity saving throw. On a failed save, a target takes fire damage equal to the falling damage you took, or half as much on a successful saving throw.

The fire spreads around corners. It ignites flaming objects in the area that aren’t being worn or carried.

This rod appears to be made of foamy bubbles, but is completely solid to the touch. This rod has 3 charges. While holding it, you can expend one of its charges to conjure a bubble around a creature or object within 30 feet. If the target is a creature, it must make a DC 13 Strength saving throw. On a failed save, the target becomes trapped in a 10-foot sphere of water. A Huge or larger creature automatically succeeds on this saving throw. A creature trapped within the bubble is restrained unless it has a swim speed, and cannot breathe unless it can breathe water.

When not in use, this rod can be commanded to take liquid form, and be stored in a small vial. The rod covers 1d3 charges at dawn.

The rows of chain links of this armor seem to ebb and flow like waves while worn. Attacks against you have disadvantage while at least half your body is submerged in water.

Additionally, when you are attacked, you can turn all or part of your body into water as a reaction, gaining immunity to bludgeoning, piercing, and slashing damage from nonmagical attacks, until the end of the attacker’s turn. You cannot use the armor in this way again until next dawn. 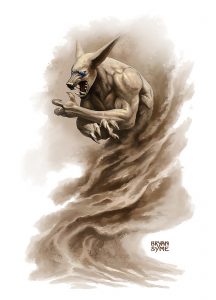 The metal weights of this bolas are inscribed with spiraling sigils of the wind. If a creature’s speed has been reduced to 0 by this weapon (see “Special,” below), you may say a command word as a bonus action. When commanded, the weights of the bolas begin to spin, creating a vortex of wind around the target. The vortex lifts the target 30 feet into the air, then releases it.

Special. A Medium or Small creature hit by a bolas must make a DC 10 Strength saving throw or have its speed reduced to 0 and fall prone until it is freed. A bolas has no effect on formless creatures, or creatures that are Large or larger. A creature can use its action to make a DC 10 Strength check, freeing itself or another creature within its reach on a success. Dealing 5 slashing damage to the bolas (AC 10) also frees the creature without harming it, ending the effect and destroying the bolas.