Skip to content
Home / Delve into the Depths in the Kobold Blog / Con Report: A Report from the Tables 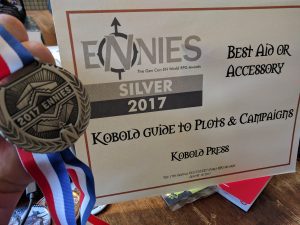 The Kobold Volunteer GM Brigade rose to the occasion for the 50th anniversary Gen Con. We had 51 tables scheduled, nearly twice the events from last year, and they went off without a hitch. Games included both Pathfinder and 5E events, showcasing stories from the dark alleyways of the Southlands’ trade city of Mhalmet to the dizzying spires of Aerdvall to the terrible badlands of the Wasted West to the treacherous byways of the Shadow Realm.

Each day offered seven to fifteen tables of excitement with eleven unique offerings, including old favorites retooled for new editions, like “Madman at the Bridge,” and convention debuts, like David Ross’s “The Stolen Road” (run for us by the inestimable streaming GM of Exploding Dice, Brian Podell) or the fantastically grim and amazing “Necropolis of the Mailed Fist” by Sersa Victory. The miniatures marched, the maps were spread, and the dice fell as they might. We had TPKs, as adventurers failed to unlock the secrets of “Last Gasp” by Dan Dillon. We had narrow escapes, as groups barely emerged from the “Tomb of Tiberesh” and it’s loose successor “Under the Devil’s Thumb,” both by brilliant podcasting veteran Jerry LeNeave.

We had first-time volunteering GMs, we had GMs returning to run and speak for their third year with us—thank you brothers Gdula! Amazingly, while we did have a couple of tables where we added a player, we had more where the Gen Con system said we were sold out and yet an incomplete table or seminar hall mustered to play or listen. Let that be a Gen Con lesson—always show up for a game you want, chances are more than decent you might scoop up a chair and a game. It was possible to join us from 8am to 4 or 5pm, occasionally as late as 11pm, every day and play a different adventure every time.

Not only that, but the Kobolds managed to bring home a bit of loot as we captured the silver Ennie award for Best RPG related product, the Kobold Guide to Plots and Campaigns. Small but fierce took the day and added to the accolades of our dedicated authors. The field was full of worthy competition, and we’re honored to have won the vote. Add that to the copy of Kobold Quarterly #1 on display in the Gen Con museum, and we swelled with enough pride, well, we might been mistaken for a lizardfolk.

So from deep in our scaly hearts, we’d love to thank all the fans, volunteers, and players who helped make this year’s Gen Con a rousing success. It was a fantastic experience and a wonderful show. Thank you all so much. We couldn’t do it without you. Our fans really made this Gen Con very special!

4 thoughts on “Con Report: A Report from the Tables”