Skip to content
Home / Delve into the Depths in the Kobold Blog / Last Gasp: A Fifth Edition Adventure 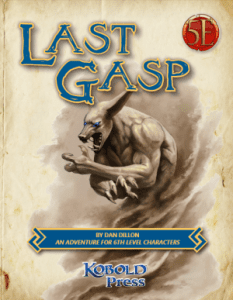 Come, friends, and shake the desert from your hair! The chill of night falls swiftly upon the dunes, and we should keep the darkness at bay together. Ah, you have a discerning eye! This is the seal of an ancient king, uncovered by a terrible sandstorm. Shall I tell you of the folly of Menet-Ka and of those who breathed their last in his service?

Last Gasp is an adventure set in the Southlands Campaign Setting, exploring the cursed tomb of an ancient king of great magical power, a magical river, and including both deadly combats and mysteries to confound tomb-robbers. It is designed for five or six 6th-level characters using the 5th Edition rules and includes two entirely new monsters, the rotting wind and the anubian, presented with complete 5th Edition stats.

Seek out the riches of a king, and may fortune favor you!

This adventure premiered at Gen Con 2015 in Indianapolis, to much acclaim, and is presented here in an expanded version. You can find Last Gasp at our Kobold Store!