Skip to content
Home / Delve into the Depths in the Kobold Blog / Don’t Look Now: Handling Fear and Suspense in Fifth Edition, Part 3 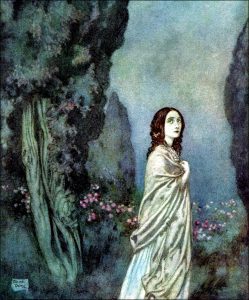 Part 3: The Monster After You

Monsters are an important staple of horror-themed games. They are the threat that keeps player characters wary about entering the next room, or nervous about peering around the next corner.

Unfortunately, scary monsters don’t frighten characters in fantasy tabletop games quite the same way they do characters in a horror movie. Why? Because experienced players already know their tricks. Werewolves, vampires, oozes, shoggoths, goblins, ghosts, zombies—none of them are scary anymore because players have encountered them time and time again.

So here are three tricks for gamemasters to alter, re-skin, or invent monsters that are sure to scare players with more than just the threat of damage dealt.

1. One monster over many. In horror and slasher movies, there is rarely more than one monster. The focus remains on a singular, overwhelming threat. Dracula, Frankenstein, the Wolfman, Jason Vorhees, Freddy Krueger, Michael Myers, the Xenomorph, the Creature, the Phantom—they’re all the star of the show, and the thing that keeps the characters in the movie (and the viewers) scared.

So when it comes time to create an encounter or a dungeon in your horror-themed game, try having only one monster that becomes the focus of the whole adventure: one vampire whose defeat is only temporary unless the players can destroy him in his coffin, one shambling creature stalking the players through the halls of a dungeon, one vicious killer who seems to shrug off damage from even the player character’s strongest weapons and spells.

This singular monster should be a “solo” creature, with the hit points and resistances of five smaller monsters put together. To your players it may appear like an “ordinary” werewolf/vampire/ghost/etc., but encountering it in combat reveals it shouldn’t be underestimated.

2. Foreshadow the monster. Monsters in horror fiction seldom just appear out of nowhere. Their presence is built up over many scenes, giving characters an idea of how it moves, how it kills, and how dangerous it is by the bodies left in its wake. It is helpful to give your monsters the same kind of build up.

Does your adventure have nonplayer characters? Have them spread rumors about the monster: tall tales of half-glimpsed sightings of the beast. Need a hook to get the player characters to seek out a monster on their own? Have some NPCs go missing in the night. All that’s left of them is blood trail, a torn bit of clothing, or a dropped trinket. Are your players a few rooms away from the monster? Litter the upcoming rooms with signs of its habitation: half-eaten bodies, blood, strange ichor or saliva, large misshapen footprints, claw-marks in stone, anything to let your players know that they are not alone, and the monster they seek is far beyond them.

3. Wound PCs rather than killing them. A monster that outright kills characters can be fun to play, but it is a short-lived thrill. To really make your players’ skins crawl, alter a monster so it focuses on maiming, wounding, and disfiguring them instead of killing them outright. Why kill them when you can instead prolong their suffering? For example, on a critical hit, have a monster break or bite off a PC’s hand. This deals normal damage but it now limits how a PC can interact with the world (bonus points if the monster then devours the bitten-off hand). For another example, have a monster use its claws/pincers/weird/gross hands to pluck out a PC’s eye, blinding them. Again, this takes away a player’s level of interaction with the world, but doesn’t kill them.