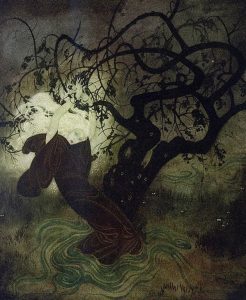 They came at noon. Walked straight across Demp’s turnip field and directly to the paddock. I been living here for ten years, and not once have those foul things been seen in the light of day. Two of them, walking together with a grim smile on their brutish faces. Behind them, trailing a few paces, was some small shadowy thing—all foggy it was, and wherever the strange being went, an unnatural shade spread in the sky. We hid as the hulks slaughtered Demp’s horses, crudely field-dressed them, and hauled the meat away into the woods. The little follow dark just walked along with them…

“The Follow Dark” is a fifth edition scenario that challenges four 4th- to 5th-level characters, and it includes the forest marauder, a creature from the upcoming Tome of Beasts book from Kobold Press!

A pair of forest marauders have been boldly attacking local communities. Though the monsters have been present in nearby forests for a long time, their weakness to light has prevented them from launching prolonged raids. Villagers report the marauders traveling with a small shadowy being whose presence magically shelters the marauders from the effects of daylight; the strange creature takes no action but to follow the brutish plunderers.

The marauders discovered the creature locked away in a cell in a temple ruin located in the forest. To their delight, they found the prisoner followed whoever carried the cell’s key. Unaffected by sunlight thanks to their mysterious companion, the marauders plot in their root-filled hovel. Steered toward the marauder’s grove by locals, the PCs and the resident giants are both surprised when other, wickeder, things come to retrieve the follow dark.

The creature accompanying the giants is only partially on the material plane. Its physical form resides elsewhere. It is immune to all damage, but can be targeted normally. A DC 10 Intelligence (Arcana) check reveals the creature’s interplanar existence. The follow dark emits a beam of ashen gray motes that rises forty feet above it and spreads out in a 100-ft. radius. Sunlight does not pierce through the cloud. This hazy covering has the following effects:

The follow dark’s material allies are coming to retrieve it. This spectral horde has been moving on the giant’s grove for several days. Shadows, ghosts, and animated objects (sword, armor) travel inexorably toward a confrontation with the giants. PCs traveling through the woods are very likely to encounter small patrols as everyone converges on the grove. The undead and animated objects all bear a strange insignia of a delicately smiling mouth with vampiric fangs. The symbol is painted onto pauldrons, or scorched onto the remnants of clothing.

The trees stoop ominously along the sides of a wide path; they have been forcibly bent and tethered by crude ropes and metal spikes. The mistreatment of the trees continues and forms a makeshift wall around a large clearing. At the center of the clearing, an enormous cave mouth descends into a root-filled darkness. Rising above it is a column of ashen motes that coalesce into a roiling shadowy cloud that hangs over the grove. A foul smell of excreted waste and refuse rise from the yawning entrance.

The grove is a circular area roughly 75 ft. in diameter that is surrounded by living wooden walls. Entering the grove, the PCs are subject to the effects of the follow dark. PCs can attempt to hack a breach point in the walls (AC 12, 30 HPs). The main entrance to the grove is protected by a crude spike trap made from sinew and stolen farm implements. A DC 14 Wisdom (Perception) check discovers the trap, which swings out at waist level and triggers a DC 10 Dexterity check to avoid 8 (2d6) piercing damage; a successful save results in half damage. Disabling the trap requires a DC 12 Dexterity check (thieves’ tools).

Animal and humanoid bones litter the ground here, and a crude smoke house has been built on the far side. A proper search of the smokehouse and a DC 12 Wisdom (Perception) check uncovers a sack of expensive spices (30 gp value) stolen from a caravan.

A Giant Panic. Read the following if the party approaches the mouth of the cave:

Suddenly a great roar and thundering footsteps is heard rising from the cave. Bursting out into the grove is a huge brutish giant with bright red war paint streaked across its sloping brow. It bellows something in surprise as it finds the courtyard occupied. It has a wild and terrified look on its face. Leveling its massive spear, it charges from the cave; a faint trace of shadowy mist follows it.

The forest marauder charges and attacks the PCs. He sought to escape the gruesome situation occurring in the root-bound cave, and is enraged and terrified. Before attacking, he yells “all flee the biting mist—little shadow brought big shadow” in the sylvan tongue. A DC 10 Intelligence (Arcana) check made on the mist that follows him reveals its necrotic nature.

Raspy breath and choking sounds fill the tunnel as you descend into the cave. The tunnel continues for 30 ft. before opening into a large round hovel crudely dug under the tangle of the forest floor. A giant crawls on its belly toward the tunnel, its face a mask of fear lit by a low fire burning along the western wall. It tosses a small silver key in your direction before expiring.

The giant is dead. The key that it had used to control the follow dark sits 5 ft. from the PCs. The PCs have one round before…

A small shadow ensorcelled humanoid walks calmly toward the key. A column of ash and mist rises from the crown of its head. Behind it, a large roiling mist follows. A figure forms from the mist; its slender arms are tipped with long talon-like fingers. “Free now, the dark-maker is.” A sibilant voice slithers through the air.

The follow dark stops when it reaches the key, or stops adjacent to any creature holding the key. It takes no further action. The wraith attacks the party; its aim is to guard the key until one of its animated armor guards comes to retrieve it. You may increase the CR of this encounter by adding additional undead.

The key and its strange follower are at the party’s disposal—for now. In the root-bound cave is a large hide map made by the giants. They have painted directions to the ruins where they found the follow dark, though their cartography is poor. A long rest coupled with a DC 12 Intelligence (Investigation) check allows a PC to guide the party to the ruins.

Who has sent the undead host to retrieve the follow dark? What of the ruins that once served as the strange creature’s prison? What does the party do with the key and how do they handle the substantial responsibility of controlling such an evil artifact?