Skip to content
Home / Delve into the Depths in the Kobold Blog / Blood-Stained Ice: Monsters of the Arctic—Soul Render (Part 5) 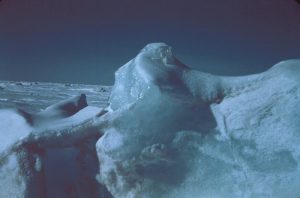 Soul renders are perhaps the single most disturbing reason for the arctic barbarians’ hatred of outsiders. Nightmarish devourers of flesh and souls, these monsters are a terrible consequence of outsiders’ disrespect for the tremendous sacrifices made by their arctic expedition companions.

Among the arctic barbarians, cannibalism is accepted as an occasional fact of life, albeit an unfortunate one. Catastrophic weather, intertribal wars, and simple bad luck sometimes conspire to leave a tribe dangerously short of food, giving them no other choice but to consume one of their own. When this happens, the normally harsh arctic barbarians go to great lengths to ensure that the process of selecting the sacrifice is as fair as possible. Lots are drawn among the tribe’s adult members to determine who will be sacrificed, the randomly chosen victim is ritually slain with a minimum of suffering, and the victim’s flesh remains unconsumed until his or her soul has been placated and allowed to pass peacefully to the next world.

Outsiders, on the other hand, often show much less consideration for the victim when circumstances force them into cannibalism. They choose the victim based on envy or hatred rather than the whims of fate, the victim’s death is often a summary butchering rather than a painless sacrifice, and the victim’s companions offer no more than a token prayer for their victim’s soul, if that, before consuming the flesh. As a result, the victim’s soul—still tied to its dead body, and traumatized and angry over the violent physical death—merges with the bodies of those who killed and consumed him. The turbulent melding of body and soul amplifies both the murderers’ hunger and the victim’s rage until they completely consume the psyches of the gestalt beings, resulting in unholy abominations that the arctic barbarians call soul renders.

The soul render’s birth warps the monster’s body until it barely resembles a human. Its stomach is disgustingly bloated and distended; however, it’s terrifyingly strong and fast despite this extra mass, moving with a hunched, loping gait more suited to a wild animal than a man. Overgrown hair covers its body, bony claws sprout from its fingers and toes, and bloodshot eyes combined with a mouthful of serrated teeth give it a terrifying visage. The monster has a feral mind to match its feral appearance, thinking only of satisfying its ceaseless hunger for flesh and souls.

Arctic barbarians loathe soul renders, viewing them as evidence of the corruption that outsiders bring, and they usually form war parties to hunt and destroy them at the first hint of their presence. Some pragmatic or desperate tribes press soul renders into service during wartime, though, which earns them the scorn of the other tribes and quite possibly a painful, violent death at the claws and teeth of these abominations.

Swift, savage, and direct attack is the most complicated tactic soul renders employ. They concentrate on a single target and tear it apart, then move on to the next target and repeat the process until all of their targets are eliminated and consumed.