Skip to content
Home / Delve into the Depths in the Kobold Blog / KotM2 Fight! Vapor Lynx 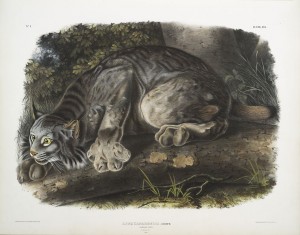 Welcome to the King of the Monsters 2 finals (see the list of finalists): the vapor lynx is random finalist 8 of 10. These submissions are left almost entirely as they were received with the exceptions that all submissions are posted with an image and are standardized to KoboldQuarterly.comstyle. Let the fight commence!

The great cat pads forward noiselessly.  Tendrils of smoke drift off its sleek grey coat, leaving whirls of mist in its wake.  The feline’s eyes shift from dull, pallid orbs to pitch black slits, its lips curl up into a fang-revealing smile… and its body fades to fog.

Vapor lynxes are capricious hunters.  While not evil, they are devious, manipulative, and most of all mischievous.  They often toy with a prey before killing it…

SPECIAL ABILITIES
Breath Weapon (Su) A vapor lynx can breathe out a deadly line of choking fog once every 1d4+2 rounds. This fog affects the battlefield as the spell solid fog (CL 6th); the key difference being, it does not spread out but remains sitting heavy in its original area of effect. Additionally, anyone who enters the fog or is caught in its area of effect must make a DC 16 Fortitude save or become nauseated for their duration in the fog and for 1d4+1 rounds afterward. If a creature succeeds on a save, it still needs to save each round it remains in the fog.

Smoky Constitution (Su) A vapor lynx is a creature that spends its time in both gaseous form and solid form.  Its unique constitution makes it immune to all fog or gas related spells and attacks, including its own.  So attuned is the cat’s physiology, a vapor lynx can clearly see through spells such as obscuring mist and solid fog.

Mated pairs prefer ambushing prey, coalescing in and out of the fog to harass potential meals. Vapor lynxes excel in battlefield control. Using their ability to solidify and poison the fog around them, they cut large groups into smaller, more manageable morsels.

These malevolent tactics have earned vapor lynxes both a nasty reputation and, often times, a hefty bounty on their heads. Additionally, their magical nature makes them a sought-after beast to those who practice magical arts, and their beautiful thick coats tempt many a furrier and trapper into a hunt they may not be prepared for. With so many hunting for them, vapor lynxes rarely stalk civilized lands or travel ways—despite their abilities, they fear an organized reprisal too much. Instead they haunt marshes and swamps, where the natural fog makes hunting all the easier… and if an intelligent humanoid happens to pass that way, then all the better.

Though reclusive, vapor lynxes are intelligent enough to speak both Common and Sylvan. These cats are particularly prideful and take great joy bantering with potential meals in an attempt to both belittle and frighten. While not as renowned for falling prey to the legendary “dragon flattery,” the few recorded tales of vapor lynx encounters recount the cats’ constant needling and self-aggrandizement.