Skip to content
Home / Delve into the Depths in the Kobold Blog / KotM2 Fight! Thistle 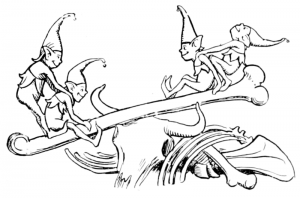 Welcome to the King of the Monsters 2 finals (see the list of finalists): the thistle is random finalist 7 of 10. These submissions are left almost entirely as they were received with the exceptions that all submissions are posted with an image and are standardized to KoboldQuarterly.com style. Let the fight commence!

(Oh, and you thought pixies were bad!)

From out of the underbrush, a small, mottled humanoid bedecked in thorny armor advances toward you astride a similarly armored wolverine.

Small, secretive, ruthless fey, thistles live in the deepest and oldest forests. Their lack of contact with civilization has left them with an outlook so dangerously alien that it would give a derro pause…

SPECIAL ABILITIES
Hide in Plain Sight (Su) A thistle can use the Stealth skill even while being observed. As long as it is within 10 ft. of an area of tall grass, weeds, or other free-standing vegetation, a thistle can hide itself from view while in the open without anything to actually hide behind.

Special Arrows (Su) When a thistle fires an arrow from any bow, it can decide to change the arrow’s properties by sprinkling it with magical thistle dust. Doing so is a free action as long as the thistle is the one who fires the arrow. A thistle can generate a number of uses of dust equal to its Charisma score each day (16 uses/day for most thistles)—the dust is useless to another creature unless the thistle gives the dust freely. In this case, the thistle chooses what effect the dust will have on the arrow when it is applied, and it takes a standard action to apply the dust to the arrow. Once thistle dust is applied to an arrow, the thistle’s chosen effect persists on the arrow for only 1 round. As long as an arrow is altered in this way, it does not inflict damage when it hits—it only causes its new effect. A thistle can choose any one of the following three effects when dusting an arrow (save DCs are Charisma-based):

Bestow Curse—The target must succeed on a DC 15 Will save or be affected as though by a bestow curse spell for 10 minutes.

Memory Loss—The target must succeed on a DC 15 Will save or be affected by a modify memory spell (this effect can only eliminate the previous 5 minutes of memory—a thistle typically uses this ability to make targets forget the thistle, so they won’t follow the thistle to its lair).

Sleep—The target must succeed on a DC 15 Will save or fall asleep for 5 minutes.

Weapon Familiarity (Ex) A bellicose race, thistles are proficient with all simple and martial weapons and with all armor (heavy, light, and medium) and shields (including tower shields). Thistles treat exotic piercing weapons as a martial weapons.

Thistles are related to pixies and, like most fey, are deeply connected to the land of their birth. A thistle clan’s general hue varies by the tree trunk color of the forest they inhabit. Their coloration spans a range from chalk-white birch, and emerald bamboo, to rich redwood, pine, mottled oak, and the black of a cherry tree’s bough. While they do not share their kin’s wings or childish curiosity, they are doughty warriors who often pick fights with creatures much taller than themselves.

As the name suggests, thistles have an obsession for small, sharp, pointy objects and wear armor covered in thorny spikes. When they fight openly, they wield small stabbing blades and lances from the backs of trained giant frogs, monitor lizards, wild pigs, wolves or even wolverines. Most often they use hit-and-run tactics, taking advantage of their ability to disappear into the landscape and their power to enchant arrows.

Thistles stand a hair taller than 2 ft. and weigh about 35 lb.