Skip to content
Home / Delve into the Depths in the Kobold Blog / KotM2 Fight! Eye of Tricks and Traps 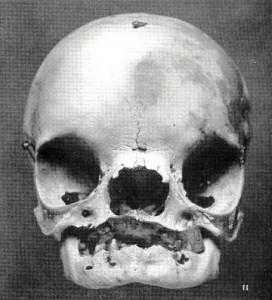 Welcome to the King of the Monsters 2 finals (see the list of finalists): the eye of tricks and traps is random finalist 9 of 10. These submissions are left almost entirely as they were received with the exceptions that all submissions are posted with an image and are standardized to KoboldQuarterly.com style. Let the fight commence!

The eye of tricks and traps is an enchanted construct that appears as a human skull with an iron cog fitted into its left eye. It lurks in ornate dungeon corridors, rising only to test intruders with obscure riddles laden with curses. If threatened, the eye of tricks and traps conjures traps that transform even the most barren catacombs into a gauntlet of pits, darts, and boulders…

Arcana or Thievery DC 18: The eye of tricks and traps is a servitor construct that guards important chambers in an evil wizard’s stronghold. It is tasked with not only turning away intruders, but also the upkeep of the wizard’s traps.

Arcana of Thievery DC 22: The first eye of tricks and traps is said to have been an homage to a legendary demilich. While most are capable of summoning only the most mundane of traps—pit traps, darts, and rolling boulders—others are rumored to have the ability to call forth pendulum scythes, flame jets, or spheres of annihilation.

TRAITS
Traps Master • Aura 10
Traps in the aura gain a +2 bonus to attack and damage rolls. This includes traps summoned by the eye of tricks and traps.

[C] Conjure Trap (Summoning) • Recharge 4, 5, 6
Effect—The eye of tricks and traps summons one of the following traps (choose or determine randomly). Summoned traps disappear at the end of the encounter.

2. Dart Wall—Several holes appear in one square of wall within 5 squares. Each round on the eye of tricks and traps’ initiative, darts fire from the wall at a single target within 10 squares: +18 vs. AC; 2d8+7 damage, and ongoing 10 poison damage (save ends). Thievery DC 18.

3. Rolling Boulder—A 1-square-by-1-square boulder appears in an open space within 5 squares. The boulder moves 6 in a single direction each round; this direction is set by the eye of tricks and traps when summoned and it may not be changed. Creatures in the boulder’s path are attacked: +16 vs. Reflex; 3d6+7 damage, and the target is knocked prone.

[C] Cursewrought Riddle (Psychic) • Recharge 5, 6
Attack—Close burst 5 (enemies in burst)
Effect—All targets must make an Intelligence check. If the combined result of all checks is less than 45, all targets take 3d8+7 psychic damage and are dazed (save ends). If the result is 45 or greater, the eye of tricks and traps takes 20 damage.

12 thoughts on “KotM2 Fight! Eye of Tricks and Traps”