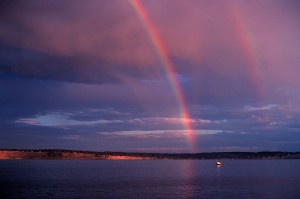 Welcome to the King of the Monsters 2 finals (see the list of finalists): the andrenjinyi is random finalist 6 of 10. These submissions are left almost entirely as they were received with the exceptions that all submissions are posted with an image and are standardized to KoboldQuarterly.comstyle. Let the fight commence!

This gigantic, black-headed snake is over 60 ft. long and sheathed in brilliant scales, each splashed with vibrant patterns of every imaginable color. The air around the serpent is heavy; redolent of the quenched red desert after a torrential thunderstorm.

Andrenjinyi are the descendants of the Rainbow Serpent, the first and greatest spirit of the world’s beginning times. The Rainbow Serpent’s children are dichotomous nature spirits of land and sky; sun and rain; male and female; and birth and destruction…

Rainbow Arch (Su) The andrenjinyi may instantaneously teleport between sources of fresh water within 1 mile as a full-round action. This does not provoke an attack of opportunity. When this power is activated, a rainbow manifests between the origin and destination, lasting for 1 minute.

In the beginning, when the flat, featureless earth slept untouched by plants, animals, or gods, the Rainbow Serpent awoke and shaped the world’s landforms with her mountainous body—rivers her winding tracks; lakes the hollows where she slept; and hills the remnants of her burrowing. When she tired of her wandering, she birthed all of the land’s animals from her sacred maw-womb.

The Rainbow Serpent then made laws for all to obey and turned any lawbreakers into the mountains and hills, never to walk the world again. Those who kept the laws were gifted with humanoid forms and sentience. Her work completed, the Rainbow Serpent now sleeps in the stars leaving her spirit-children, the andrenjinyi, watching over creation.

The Rainbow Serpent shed the andrenjinyi like scales during her primordial wanderings, but she has begat no more since her ascension to the stars. While andrenjinyi are ageless fertility spirits, they cannot themselves reproduce, making each an irreplaceable link to primeval creation destined for an inevitable extinction.

Andrenjinyi hunt as other animals do, but they transform devoured prey into unique species with their baleful polymorph ability, typically creating mixed gender pairs. The region surrounding an andrenjinyi’s sacred pool always shelters a unique menagerie of strange and beautiful animals.

Andrenjinyi are naturally aquatic, preferring to live deep in accumulations of fresh, life-giving water.  The serpents usually react violently to intrusions to their sacred sites, attacking transgressors unless they approach with the correct rites, identified with a DC 20 Knowledge (nature) check.

Andrenjinyi, when respected with ceremonial corroborees and obedience to the Rainbow Serpent’s laws, sometimes elect to protect nearby communities, calling forth drought-breaking rains, curing afflictions or destroying rivals. Revered andrenjinyi take offense when their petitioners break fertility and familial edicts, such as prohibitions on incest, rape and matricide, but also obscure obligations including soothing crying infants and the ritual sacrifice of menstrual blood. Punishments are malevolently disproportionate, often inflicted on the whole community and include baking drought, flooding rains, petrification, pestilence, and animalistic violence.

An andrenjinyi can be called with summon nature’s ally IX and summon monster IX spells.