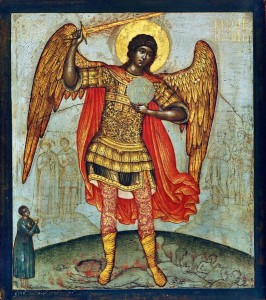 Insular to the point of xenophobia, the peacock spawn interact only sparingly with outsiders, trading for weapons or magical items, but always with disdain as if they believed themselves superior to other beings even in the face of their own often desperate tribulations within the Abyss.

Continually wandering, with no set layer to call their home, the peacock spawn take refuge on abandoned or unclaimed layers, but even when they find a place of relative safety, they never remain there for more than a year or two at most before moving on, resuming their search. Though their wandering seems aimless, their vision of what their birthplace resembles is a firm dogma among their kind: a warped version of the great mountain of Heaven and a cold, burning pit of lightless flame where the unworthy are blinded and consumed by something too beautiful to exist within reality’s mundane trappings…

In line with this mythology, they view themselves as slivers of perfection, modeled upon their maker’s blinding form, and as such, they disdain most clothing, eschewing anything that would cover their bodies except for armor in times of conflict. They reflect their maker’s reflection, especially in their native environment since in their mythos, the Abyss is simply a chancre, an open sore upon the flesh of a multiverse too sick and too unworthy of the proximity of their most splendid maker who awaits its children at the plane’s heart, a beautiful splinter embedded in unholy flesh.

In the absence of any documented and readily available histories within the Abyss that detail their creator, their racial religious mythology provides the only clue in an obscure entity known as the Peacock Spirit, from which their name derives. Relatively unknown even in the Abyss itself, some scholars and wizards deem the Peacock Spirit to be a reclusive demigod of the Abyss, an alternate name for one of the plane’s more established demon lords, or an independent, obscure one. The peacock spawn reject these ideas as heresies and claim their creator originated on some foreign plane of beauty, rejected and exiled by rivals jealous of her majesty. Cast out, she plummeted to the Abyss, and in the process of her fall, or even her final impact, the peacock spawn were formed from the ashes of that cataclysm like shining fragments of an even more priceless gemstone.

Given their nature, which rejects the very substance of the Abyss itself, and the fine details of their mythos, the archons of Heaven refuse to discuss the subject. The parallels are too close to their own Melek-Taus, and the consequences horrifying. The peacock spawn may be nothing less than the broken fragments of Law shed and hemorrhaged from the Peacock Angel’s flesh when she fell from her celestial glory as Lord of Heaven’s 6th tier—if the archons’ fears are true.

SPECIAL ABILITIES
Axiomatic Wound (Su) Any damage inflicted by a peacock spawn (whether through natural attack or weapon) is treated as if from an axiomatic weapon, inflicting an additional 2d6 damage against chaotic creatures.

Blinding Glory (Su) By invoking the power of their mythical creator, once per day a peacock spawn may call forth a blinding column of burning light, emanating from themselves in a 30-ft. radius. Creatures caught within the burst are subject to blindness and 1d6 damage per HD of the peacock spawn (Reflex DC 21 for half damage and to negate blindness; Charisma-based). Other peacock spawn are immune to this effect.