Skip to content
Home / Delve into the Depths in the Kobold Blog / Journeys to the West: Behtu 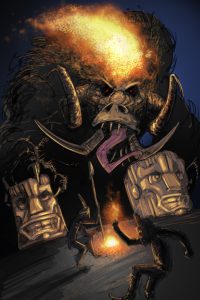 We’re approaching the end of the funding period for the Journeys to the West Kickstarter, but that doesn’t mean we’re slowing down the fun involved for everyone. In fact, we have another creature for you to add to your game right away—if you dare!

Also, those of you who have already joined the crew might want to visit the Kickstarter page to see what new expanded rewards have been added to the package.

Those of you who haven’t joined in yet should also go take a look to see what you could join in on. Much has happened in the past week—including the creation of Behtu, the half-ape, half-pygmy creatures with demon blood in their veins!

With a face like a mandrill and tusks like a great boar, these ferocious half-ape, half-human pygmies have demon blood flowing in their veins. One does not travel to the volcanic temple-islands of the Behtu unless desperate or suicidal.

Ichorous Infusions Behtu troupes and war parties carry 1d6 vials of ichorous infusions. They may ingest an infusion as a standard action; often they do this in preparation for ambush. For 2d6 rounds later, the behtu gain a +4 sorcerous bonus to their Strength and Constitution scores, as well as doubling their base speed (including their climb speed) and gaining an extra move action each round. Behtu also take a –4 penalty to their Intelligence and Wisdom scores for the duration. If a non-Behtu PC ingests the infusion, treat as if the PC had been poisoned with black adder venom (afflictions/poisons, PFCR).

Languages Behtu begin play speaking Abyssal and Ape. Behtu with high Intelligence scores can choose from any of the following languages: Common, Draconic, Goblin, and Orc. (The creature above has its two additional languages noted already.)

Skilled Behtu have a +2 racial bonus to Stealth and Survival checks.

Spell-Like Ability Behtu can use burning hands once per day as a spell-like ability. Caster level is 1st or at the Behtu’s sorcerer level.

Lore
Mechuiti (meh-CHOO-ee-tee), the demon lord of apes, cannibalism, and torture, combines the cruelty of a demon with the cunning of a human and the ferocity of an ape. He has bred the same qualities into his people, the Behtu (BAY-too—singular and plural are the same). In his volcanic temples, his idols weep with his ichorous demon blood, which the Behtu use to create infusions to give them inhuman strength and speed. The Behtu also use the infusions to etch demonic glyph-tattoos on their skin to grant them infernal powers and protections. The Behtu are known to breed demonic dire iguanas as war mounts. The most powerful Behtu sorcerers and druids have been known to ride large lava drakes and small volcano dragons as personal mounts.

What other sorts of trouble can your PCs get into? Go visit the Journeys to the West Kickstarter page to find out.

14 thoughts on “Journeys to the West: Behtu”