Skip to content
Home / Delve into the Depths in the Kobold Blog / Monday Monster: Suturefly 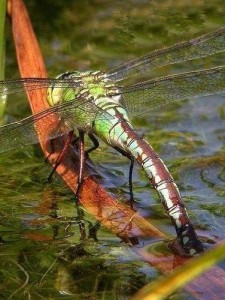 Tim Connors and the patrons have already brainstormed more than 50 forest monsters for Tales of the Old Margreve, and they are winnowing the list to the best dozen or so for use in the adventures. Just as a sample of how these are not exactly typical forest denizens, here’s the smallest of the monsters, the Suturefly.

Sutureflies look like dragonflies with three pairs of gossamer wings, a jagged splinter-wood body, and flashes of bright colors running down their sides.

Margreve folk rarely speak when sutureflies dart through the trees, for these creatures listen for lies and sew the offender’s mouth, nose, and eyes shut. Some say the Old Wood hides nothing but liars, and that is why the Margreve is shrouded in silence. Some say the Margreve uses sutureflies to keep out those who cannot be trusted to follow the Old Ways. Others claim that the Margreve pits sutureflies against its own inhabitants, to smother those who break its covenants and silence those who would reveal its secrets…

Adventurers evidence a suturefly’s handiwork more often than they glimpse one directly. Bodies with sewn mouths and noses lie dead in the underbrush. Mysterious children whose mouths are ringed with black puncture marks observe intruders from afar. And ascetic dryads step from trees, their eyes sewn shut against the evils of civilization.

Sutureflies dart, hover, and strafe with near perfect maneuverability. The common varieties are 6 inches long, but deep woods rangers claim to have discovered detached, 5-ft.-long wings, crushed in the forest detritus.

SPECIAL ABILITIES
Detect Blaspemy (Su) The most common variety of suturefly attacks any creature that utters an intentional lie, detected as if by a permanent discern lies spell (Will DC 15; CL 5th). Folk of the Outer Margreve release sutureflies from wooden coffers brought to Forest trials to encourage witnesses to tell the truth, and in the Heart of the Wood, a daughter of Baba Yaga polices her “flock” of stolen children with sutureflies. Other varieties have been bred to attack based on verbal triggers other than lies. Black-banded sutureflies detect curses and religious blasphemies. In the Deadfall Swamps of the deep Margreve, a green and gold variety attack briar folk, hags, and any others who allow magic to escape their lips.

Sew (Su) If a suturefly hits with a touch attack, it sews its opponent’s mouth, nose, or eyes closed. With supernatural speed, the suturefly repeatedly pierces the victim’s face, each time threading a loop of the victim’s own skin through the previous hole. These skin loops blacken, shrink, and draw the orifice closed. It takes a full round action and a sharp blade to sever the loops and reopen the orifice. Intense pain and 2 points of damage accompany the procedure (DC 15 Heal check for half). A victim whose mouth and nose have been sewn shut immediately begins suffocating. Victims five or more size categories larger than the suturefly are unaffected by its sew ability.

Before Combat Sutureflies dart from hiding to attack with surprise.
During Combat Once it has sewn a mouth closed, it targets the same victim’s nose, unless threatened by another opponent.
Morale A suturefly attacks until it has sewn all of its opponents’ mouths and noses closed. It pursues fleeing opponents for one final attack round.