Skip to content
Home / Delve into the Depths in the Kobold Blog / Expanding Codex: Moon Drake 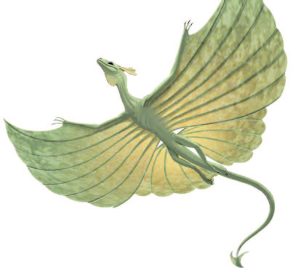 Shiftersense. The moon drake can sense the presence of shapeshifters within 30 feet.

The moon drake’s darkvision is reduced to 60 ft.

Mooncurse Slash (Recharges after a Short or Long Rest). Melee Weapon Attack: +6 to hit, reach 5 ft., one creature. Hit: The target must succeed on a DC 15 Constitution saving throw or become cursed with lycanthropy (the moon drake chooses the type of lycanthrope). A creature that previously suffered from lycanthropy (even if it was cured) makes its saving throw with disadvantage. A lycanthrope has advantage on its saving throw. If a lycanthrope fails, it changes to the type chosen by the drake. This attack can’t affect a natural-born lycanthrope.

The following magic item and spells are inspired by a moon drake’s abilities:

This dagger is fashioned from a moon drake’s fang. You gain a +1 bonus to attack and damage rolls made with this magic weapon.

You can use an action to imbue this weapon with additional magic for 1 minute or until an attack using this weapon hits a shapeshifter. That creature must succeed on a DC 15 Constitution saving throw or take 2d10 radiant damage. On a failed save, the shapeshifter instantly reverts to its true form and can’t assume a different form for 1d4 rounds. The dagger can’t be used this way again until the next sunset.

You change the apparent moon phase for a 1-mile radius around you for the duration. If a creature within the affected area possesses abilities dependent on a particular moon phase, or change shape based on the moon phase, it must make a Wisdom saving throw to avoid being affected by this spell.

Casting Time: 1 reaction, which you take when you take damage or are restrained
Range: Self
Components: V
Duration: 1 round

This spell creates a gravitational effect similar to the moon’s effect on tides. You can create your choice of low tide or high tides in an area up to a 1-mile radius from the point you designate. A low tide strands vessels and reduces flooding in the area, while a high tide might create flooding in an area. Vessels in a low tide are gently lowered to the seabed and take no damage.

You can use this spell to reduce the height of the wall created by the tsunami spell by 50 feet. This also reduces the damage dealt by the wall by 1d10.