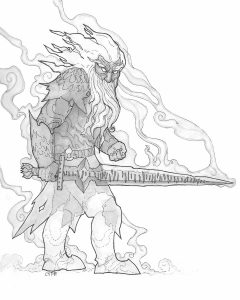 As large as it was, it hardly made a sound. We saw the great beast lumbering toward us from a distance, and if it saw us as we scampered for cover, it didn’t acknowledge it. The thing just stared right past us with dead eyes, toward the gigantic disturbed grave we’d camped near. We drew weapons and shared a couple of nervous glances—the size of the thing gave us pause. Reynaldo, the pickpocket who’d tagged along with us since the ruins of Andarre, would usually slink off at this point, but even he could only stand there gazing up at the giant, an audible gulp escaping his throat. Benoit spoke up first, whispering to our mage, Grovius: “Is… is it walking dead?”

“No. He lives,” mumbled the mage. “But like all of his wandering kind, he is heavily burdened by the restless spirits of his forefathers…”

As it got closer, we could see tangles of knotted loops and cords shrouding its hairy body, a rough-carved talisman or rune stone the size of a man’s head dangled from each cord. Its head drooped to one side, and it sniffed the air, its milky-white eyes oozing pus.

Through the heavy fog we saw more forms emerge, each as insubstantial as the morning mists. As one of the ghostly forms raised its translucent hand and pointed, so too did the corporeal giant looming above. In four slow, enormous strides, it was past us, standing over the mound of upturned earth behind us, staring down, and studying it intently.

Benoit shuddered. “What is it looking for? There’s nothing in there. No body. Only claw marks from below and huge footsteps heading to the east, smelling of old rot. I daresay no treasure.”

“Not exactly,” whimpered Reynaldo as he slid aside his cloak to reveal a large copper talisman, filthy with grime, shoved in his waistband. “I thought it might be worth something.” He dropped it to the mud below with a thud.

We froze as those ghosts drifting around the giant slowly turned toward us at the sound. Their cold, vacant eyes fell on us like a gently laid funeral shroud. Grovius closed his eyes and prayed, and Benoit’s sword drooped in his hands. The giant turned and sniffed the air again. Its head cracked back toward us at a disturbing angle. It sniffed. And sniffed again.

As we stared, wide-eyed and dumbfounded, the cursed creature turned and heaved one foot forward and lumbered off in a slow, stooped gait to follow the tracks that led eastward from the grave.

Neither the living nor the dead rest quietly in the Haunted Lands of the Giants, it would seem.

The arid moors and hinterlands below the Pytonne Mountains that creep south toward the Gardens of Carnessa host the crumbling culture of the giant slaves that once served the magocracies. Cursed with long lives and restless deaths, these giants are joyless at best and feral at worst. Transient tribes of hill and stone giants wander the stony, shrub-shrouded lands, haunted by ghosts that linger no matter how far they travel.

The parched desert lands hold the tombs of countless giants who perished during centuries of enslavement. With each passing year, more and more of their corpses—sometimes one or two, other times entire tribes—rise up to walk the land as animate dead, pursuing strange goals and protecting otherwise barren areas without discernible cause.

When their dead bodies fail to rest quietly, the souls of Midgard giants return to haunt their living descendants. The shades loom behind their living kin, their ectoplasmic forms draining their vigor as they cajole their descendants to return their bodies to the moor’s stony soil or the raised rock cairns that mark giant tombs throughout the lands.

Some giants may be lucky enough to reach adolescence before they feel the presence of a long-dead ancestor while others are haunted by a half-dozen unquiet souls before they take their first steps. All are subject to occasional possession, often awakening weeks or months later far from home, caught in the middle of some incomplete and forgotten quest their own soul’s reclamation has now interrupted. This oppressive haunting drains the life from the region’s giants, who are morose and sullen, pale or jaundiced. With the giant’s milky, dead-eyed gaze, many travelers mistake them for the legendary dead that plague the realm.

The ruins of the giant’s ancient cities—once glorious towers of living stone—can still be found here, now little more than crumbled foundations with hovels and lean-tos among the squalor. Great Andarre sits in ruin, itself a seat of stone giant sorcerer chieftains in a forgotten past, remains as a dust-choked ruin. Cassilon, once a thriving center of hill giant trade and craftsmanship, fares no better.

The giants pick through the decaying buildings for reminders of their own past and heritage, hoping for some clue to lift the curse of hauntings. Others outfit themselves with a lifetime of accumulated totems and glyph stones before setting across the landscape loaded down with talismans and relics of dubious effectiveness. All wander in hopes of finding their undead ancestors and putting their bodies to final rest. They strive to exorcise the ghosts that always bear down from behind, wailing mournfully for respite.

The Wasted West contains the Haunted Land of Giants, among many other intriguing areas. Want to help shape a world? Join the Midgard Campaign Setting Project.

4 thoughts on “A Land as Haunted as Its People”