Skip to content
Home / Delve into the Depths in the Kobold Blog / Of Godly Might: Clerics of Loki (Part 1) 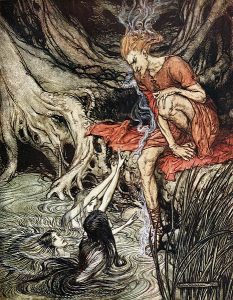 Known for his mischievousness and unpredictability, Loki’s ways are often emulated by scoundrels, charlatans, and imposters. Due to his predilection toward fickleness, he is less often followed by individuals that prefer rules or strict adherence to prescribed regimens. Though individuals may wish to elevate their wily ways to match that of Loki’s, the trickster god is rarely called upon to intervene in mortal affairs as his assistance can be as much a hindrance as a help. Witches and spurned lovers, however, tend to appreciate his sometimes malevolent sense of humor and have been known to curse an unlucky fellow with the invective, “Loki’s luck be upon you!” Nothing good ever comes from such an appeal.

Those of Loki’s priests that find the ability to change one’s appearance to better blend with their environment appreciate his mutation domain.

Deities: Loki, and any deity whose portfolio includes shape shifting or change.
Granted Powers: You are the master of mutating forms, including your own, that of others, and even objects.

Elongate arms (Sp): You can touch a creature as a move action to cause its arms to grow an additional 5 ft., thereby extending its reach for 1 round. You can use this ability a number of times per day equal to 3 + your Wisdom modifier.

Flexible appendages (Sp): At 8th level, as a standard action, you can cause your hands and feet to sprout suction cups like that of a tree frog, which grants you a climb speed equal to your land speed for a number of rounds equal to 1/2 your cleric level. While climbing using flexible appendages, you can wield a weapon in one hand, you do not lose your Dexterity bonus to AC, and you gain a +8 racial bonus on all Climb skill checks. You can use this ability once per day at 8th level, and an additional time per day for every four levels beyond 8th.


As you poke the dried tongue with the needle, your target becomes unable to pronounce words properly, spewing only garbled gibberish from its mouth, making it extremely difficult for the target to cast spells or use the Bluff, Diplomacy, or Intimidate skills effectively. The target suffers a -5 penalty to such checks and cannot cast spells with verbal components. This spell has no effect on spell-like, extraordinary, or supernatural abilities. A successful Will save negates the penalty on skill check saves and reduces the duration of being unable to cast spells to 1 round. Each round on its turn, the subject may attempt a new saving throw to end the effect.