Skip to content
Home / Delve into the Depths in the Kobold Blog / Howling Tower: Cardtography and Multi-Level Dungeons

We’ve covered the basics of how to lay out the cards, how to connect the cards, and how to decide what each card represents in a simple dungeon. In this installment, we look at ways to create a more involved, multi-level complex.

If we’re talking about a dungeon (and for the time being, we are), then all that’s needed is a way to locate some stairs or ramps down to the next level.

The simple and obvious way to do this is to identify one card as the location of the stairs, shuffle it into the deck, and search until it comes up. This has two downsides:

There are ways around both of these issues. You could, for example, count off the top 25 cards after shuffling the deck and set the rest aside, then shuffle the stairs into only those. That solves problem #1. To solve problem #2, you could take 12 cards, shuffle the stairs into them, and put those at the bottom of the stack of 25; now you know the stairs won’t be found until the level is at least half explored.

I’m not a fan of either step. It’s a clumsy way to do business, and the goal with this system is to be streamlined and elegant. So a different solution is needed.

The Cardtography solution is completely different.

A staircase occurs anytime a card is revealed that has the same color and value as another card that’s already faceup.

So, for example, assume you’re three rooms into exploring a dungeon where the face up cards are 3 of diamonds, 5 of spades, and Jack of clubs. If the next card is the 3 of hearts, 5 of clubs, or Jack of spades, then that chamber contains a staircase down to the next level (or elevators, or portals, or whatever you’ve defined your connector to be).

You also could explore a 5-by-5 grid without finding any stairs, but the odds are low—well below 1 percent. Odds are 50/50 that stairs will be found by the time the ninth card is revealed, and in four out of five cases, they’ll be found by the time the twelfth card is revealed. It’s impossible to flip more than 27 cards without finding a match, but it’s so nearly impossible to flip more than 19 that you’re unlikely to ever see it happen.

What’s more likely is that you’ll see two, three, or even more sets of stairs, if characters keep exploring after finding the first set. If that bothers you, here are some simple workarounds (simpler than arranging the deck beforehand, anyway).

You can mix and match these options, too, for more variety. For example, even-numbered combinations could indicate stairs down to the next level, but a red face-card combination (which might never come up) indicates stairs leading two levels down.

When a staircase occurs, place a die on the card, with the number showing the level the stairs connect to. Place another die in the chamber at the bottom of those stairs (the first chamber explored on the lower level) to indicate it contains stairs leading up.

With all that in mind, try playing the dungeon outlined in installment 2 with staircases occurring on numbered cards only. When explorers descend to level 2, start a new card layout (preferably with a second deck of cards) and switch to using the encounter grid below—a nest of subterranean dwarves. 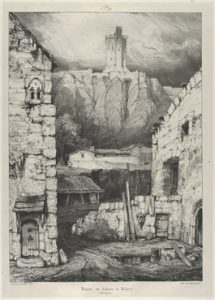 Barracks. Sleeping quarters for 3d6 duergar. Their alertness is low because they consider this a safe location.

Dead Adventurers. A group of injured adventurers retreated to this apparently safe chamber to rest, but it sits atop a nest of poisonous centipedes.

Echoes. Unusual cavern architecture causes long-lasting echoes through this chamber. Sounds from distant chambers can be heard, giving the impression that monsters or duergar are moving just beyond every exit. Likewise, noises made by characters can be heard far away.

Forge. The duergar metalworks. Many duergar working here, but the tremendous noise and smoke make stealth a good option.

Fresh Air. A breeze from outside blows through this area. A thorough search might reveal a narrow, twisting passage back to the surface.

Fungus Garden. An immense forest of fungi. It’s guarded by shriekers, lizards, and duergar guards, but the area is large enough that characters might get through—or into tactically advantageous positions—by stealth.

Guard Post. A fortified chokepoint in the tunnel system manned by duergar or troglodyte guards. A frontal assault is unlikely to succeed. Characters must use cunning or find a way around.

Marketplace. A neutral-ground trading post where the duergar interact with other subterranean races. Adventurers attract attention but aren’t attacked here, and they might be able to gather information or purchase slaves who know about nearby areas.

Pool. The water is cold, clear, and deep. The giant cave octopus living in the pool remains hidden as long as the water isn’t overly disturbed.

Runeshrine. This hall is filled with rune-carved menhirs and tablets. A few have the power to unleash bolts of lightning or waves of force.

Temple. A shrine to the duergars’ diabolical deities. At least one divine spellcaster and several acolytes are present.

Troglodyte Warrens. The troglodytes might be partners of the duergar (certain to attack PCs) or slaves (potential allies to the PCs). Either way, the stench coming from this area announces their presence well before characters enter.