Skip to content
Home / Delve into the Depths in the Kobold Blog / Warlock’s Apprentice: The Darkest Vaults of the Great Maze 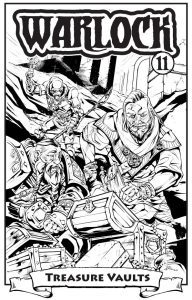 Every minotaur whispers its name, senses its presence, wonders at its complexity, its enigma, its beauty—the First Labyrinth.

To them, the Plane of the Great Labyrinth is just one facet of all mazes, and all mazes are one. Their darkest secrets, their greatest treasures, their deadliest dangers, all may be found beyond the next turn or through the next portal.

The Darkest Vaults of the Great Maze

The First Labyrinth—maze of the world, cradle of convolution, and insanity of endless complexity—is one of the great mazes of the world. Or maybe it’s one aspect of all mazes given form in Midgard. For now, the First Labyrinth may be the most unstill of all mazes. Through the Plane of the Great Labyrinth, the Great Maze touches every maze in existence, senses kinship and reaches out: touches, sometimes binds, absorbs, embraces, often fleeting, occasionally forever.

The First Labyrinth is in the Southlands city of Roshgazi but exists everywhere. The city decays on the shores of the Middle Sea, her towers torn by dragons 300 years ago, her soul fractured like that of her guardian and ward, the enigmatic and shattered Heart of the First Labyrinth. The Heart reaches into the dreams of minotaurs, haunts them, teases them, guides them, yet it is insane. One face of the Heart is called the Poet: wise and benevolent, it seeks to bring aid to repair its fractured home. The dark face is called Broken, which still believes the war with dragons goes on in the city streets above and reaches out, claws outward to draw aid into the First Labyrinth for the battle that rages only inside its mind. And to its fractured mind, that aid can take so many different forms.

The madness is spreading. Yearning for aid, it stumbles blindly around every corner of every maze searching.

Mazuli Sul (the Heart’s name in the native tongue of minotaurs) thus gropes outward, ever searching for help, opening portals into mazes that should be left undisturbed and unknown.  Mazes grow into mazes, ways become confused, complex, unpredictable. The greatest maze-conjuring minotaur priests have an inkling of the dangers this holds—accidents in their own summonings have taught them that no maze is ever truly tamed—and they whisper tales of dread but also tales of vaults groaning with secrets, magic, and treasure. These vaults may be encountered around any turn in the most mundane dungeon or simplest maze. There is therefore an endless vigil, watching alert for what the Heart has drawn to its bosom to aid the minotaurs and thus potentially reap their destruction through desperation. They call these vaults the Dark Vaults of the Great Maze.

The Plane of the Great Labyrinth is endless and so is the potential for these dark corners. A few are listed below, but in truth, when maze links maze, there is no knowing what may lurk beyond the next turn…

In their endless plotting and hate, do thoughts come unbidden to them? Paranoid, powerful, hungry, what crooked wants lurks behind those demented minds? Is there any doubt? Is there any fear?

Belphegor once had a dream—or more correctly a nightmare. In his nightmare, Belphegor (see Creature Codex) was stripped of his beloved Prime, his steed and citadel and love, and cast back to the terrible pit from which he crawled an eternity ago. In that pit, his fears were laid bare: his terror, his desires, his misery. And that suffering was given flesh, a wretched, pitiful wan thing that sobbed as it dragged its flaccid wings behind its emaciated form.

But when Belphegor awoke, the nightmare did not go. The given flesh and form and pain lay humble and broken before him. So quite naturally, the archdevil tore it to pieces and wondered in its dark heart who had caused it. They would suffer as only an enemy of an archdevil can.

Alas, it returned to his dreams and grew flesh anew, and each time the archdevil tore the thing apart, it came back stronger, slowly taking pieces of the archdevil with it—memories, desires, hungers. Strength. His twin, his alter ego, grew, and Belphegor knew he would never be free of it.

Belphegor spoke to his beloved Prime, anger of toil—the thing of bones and metal and hate—and Prime whispered a plan. Build again, it impeached. Build a prison about your shadow that it can never escape from and where nothing can ever find it to use against you.

It called the prison Belphegor’s Penance.

The Penance is alive, alive with wickedness in its cat’s cradle of gears and gates and traps and structures, a maze with a dark secret. Shambling constructs roam its endless levels: crooked gorgons with too many heads, pale golems made of the flesh of things that have never cast a shadow. In mockery of his own crooked shadow, his unwanted twin, Belphegor flensed his skin and gave it life, gave it hunger and lidless eyes that never tire of their watch. And there within, in a tower within a maze within a citadel, lurks the true Penance of Belphegor, his alter ego, his intimate, his shame, a thing that calls itself the Shadow of Belphegor—a wretched sickly thing that embroils all the terrors and paranoia of an archdevil. And in its terror, it wears the skin to keep it safe, crooked limbs to fend off foes and bloated eyes that forever seek escape from its vile guardians.

Broken sensed the awful power at the other end of that vision, a twisted kinship in the constructed maze with a dark brooding purpose and anger. And one day, Broken reached out, and the First Labyrinth touched the Penance…

Now fronds of its demented limbs caress the First Labyrinth, grope in the darkness, the great mazes somehow sensing kin, wanting to embrace. For now, such couplings have been rare—a scent upon the air of maze walkers of oil and flesh and torment, confinement beyond counting in mortal time. Screams made with mouths that have never seen the sun. Tales from demented things that lurk in the deepest parts of the Plane of the Great Labyrinth tell of something out there in the dark that is a prison, but for what?

And alas, for Belphegor also senses this and fears a joining, fears that his Penance will be breached, violated. And that cannot happen. He sends his own crooked creations into the aspects of the Great Labyrinth to seek, to cut these ties, to break these limbs, and to destroy the thing that seeks to embrace his misery—Broken itself…