Skip to content
Home / Delve into the Depths in the Kobold Blog / Historical Steel: Dialing in the Range 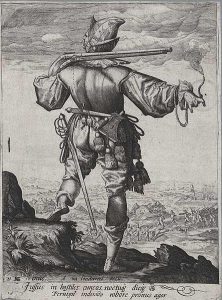 Beyond the overlooked polearms and famous straight, thrusting, and curved swords lies a major category of weapons that just as importantly deserves some mention—ranged projectile weapons. From the nameless men-at-arms shooting crossbows from castle crenellations to green-suited, do-gooding outlaws with their longbows to the swashbuckling musketeer, each has their unique place in the annals of fantasy fiction. And before anyone stomps off mumbling “guns in my fantasy” and “ruined forever,” take a deep breath for a slightly different mantra: “there’s no such thing as a perfect ranged weapon.”

The bow is ancient history or, to be more precise, prehistory. The bow is also fairly simple, at least in theory: it’s a D-shaped spring that launches a slender, stabilized dart when it attempts to return to its natural shape. From an engineering standpoint, a bow has to have high tensile strength on the outside and compressive strength on the inside; numerous solutions have been made, all with their purposes, advantages, and drawbacks. Selfbows, made from a single piece of wood, are simple to make, hold up well in adverse conditions, but are often extremely long. Composite bows, especially recurve bows, are a blend of multiple materials, typically wood, horn, and leather, and while they are smaller for a given power—handy for horseback archery—they can be louder, and the animal glues used to join the materials can be ruined by rain or humid environments…

From a warrior’s perspective, a bow—or rather a formation of archers—was battlefield artillery. The famous English longbow, a yew selfbow, is actually Welsh; its originators used it in guerilla tactics, while its English adopters used it primarily as massed artillery. The longbow was incredibly deadly for its day, able to pierce chain and, to a lesser and debatable extent, thin plate. Until the advent of repeating firearms, it was both the most accurate and fastest-firing ranged weapon on the planet. It also had one major drawback: training. Archery is a learned skill, and an English longbow could easily have a pull weight of 110 lb. A would-be archer would need a childhood of training and might literally end up with one arm a couple inches longer than the other. This is not say that all bows used in warfare were this mighty; the fantasy “longbow” as depicted is often closer to a hunting selfbow or a composite recurve with a more reasonable draw, and fantasy adventurers can reasonably be expected to devote more time to their training. But the bow was regarded as a peasant or yeoman’s weapon. Raising a force of archers was no simple task, and the result is that, a few famous British victories aside, the bow wasn’t as singularly decisive in combat as popular myth dictates.

The crossbow has a somewhat clearer origin in Western history: the Greeks. The gastraphetes was a crossbow with a composite bow for a prod, invented circa 400 BCE, and was a close cousin to the torsion-powered ballista, used extensively in such form by the Romans. The hand-held crossbow in the modern sense became popular in Central Europe in the 11th century, and it was the ranged weapon of choice brought to the Crusades. While the weakest crossbows can be pulled back by hand, most were pulled back by a hook, lever, or with a mechanical crank; this allowed crossbows to be loaded with the leg and hips, so one didn’t have to be as strong as with a comparable bow. Unlike a bow, a crossbow can be cocked, loaded, and then stowed, which made it popular with rogues and highwayman—many of the arbalesters taken to the Crusades were ex-highwayman “mercenaries.” Later, heavier crossbows used steel prods to achieve devastating short-range power and armor penetration, and a person could be taught the basics of the crossbow in a week instead of a decade. Of course, it also had its drawbacks. Shorter, unfletched bolts meant the projectiles lost energy quicker, were less accurate, and had shorter range than a bow. Composite crossbows could not be easily unstrung during rainy weather as a bow could. A crossbow was typically more expensive than a comparable bow but, above all, was painfully slow to fire—more so as they grew more powerful and relied on mechanical aids to cock them. Most fantasy games are unrealistically generous compared to a real-life crossbowman’s 2–3 shots a minute. And while the crossbow got the short end of the stick in the Hundred Years’ War against the longbow, it remained a simple, powerful, and reliable ranged weapon in common use well into the 16th century.

As glaring as it might be to some, the gun is firmly a weapon of the High Middle Ages and has its roots firmly in real-world alchemy. Chinese alchemists invented gunpowder in the 11th century, and by the 13th century, the first proto-guns, fire lances, were in use and gunpowder had reached Europe. By the 1300s, cannons had reached Europe although, at first, harpoon-like fire arrows were the primary form of ammunition. During the Battle of Crécy in 1346—famous for its use of the English longbow—the English also brought five cannons.

Early hand guns were literally hand cannons, crude tubes with touchholes for hot coals or smoldering wood, but by the 15th century, two inventions turned the gun into a portable ranged weapon: an S-shaped trigger with a clamp known as the serpentine and a treated rope known as a slow match. Together, they formed a somewhat reliable way to control the ignition of gunpowder in what become known as the arquebus. At the start of the 16th century, clockmakers put forth a spring-loaded wheel that spun against a piece of sparking pyrite (in a process akin to a modern disposable lighter) to create the wheellock: it was less sensitive to rain and more importantly, could be pre-armed, which allowed the invention of the portable, concealable pistol. A century later, the curiously simpler flintlock took over as the primary means of ignition.

So how did early guns stack up on the battlefield? They were a mixed bag. Like the crossbow, they were simple to operate, but like the composite bow, they were finicky and sometimes utterly useless in wet weather. They were not as fast to refire or as accurate as bows and had reload times comparable to a crossbow. Unlike a bow or crossbow, they could not be used for artillery-style plunging, indirect fire. And to top it off, the clouds of white smoke their firing produced obscured the battlefield (the reason for later eras’ colorful uniforms). And while their armor penetration eventually exceeded the crossbow and changed the course of warfare, it literally took centuries to get there—the word “bulletproof” refers to a literal proof mark made on plate armor by an armorer to show the armor could withstand a gun of its day.

Why did armies eventually switch to the gun? While the complexity of forging and the formulation of gunpowder meant it could somewhat be monitored by revolt-wary monarchies, it was the combination of their crossbow-like ease of use with a new technique: volley fire. Rows of men trained to fire together turned arquebusiers into artillery, just like their longbow-using predecessors and this, combined with the polearm-friendly pike square, merely sealed the deal. The fabled armor piercing was just the cherry on top.

The real hot-button issue is, of course, guns in a fantasy setting. For some, it breaks their suspension of disbelief, and there’s no arguing about it. However, in one of those situations where history is weirder than fiction, guns and knights coexisted for 300 years.

A popular counterargument is the idea of a medieval technological stasis; that with the advent of magic, technological progress has stopped, freezing arms, armor, and lifestyle for perhaps thousands of years. Given that an average fantasy setting already typically borrows arms and armor from the Ancient Egypt to the Renaissance and is well-stocked with tinkerers, alchemists, and explosives, why wouldn’t there be room for guns? We assume technology is a linear path, and that if one starts with an arquebus here, one will end up with a modern assault rifle next Thursday, but innovation doesn’t always have to be that way. A world that never undergoes an Industrial Revolution might stay with wheellocks or flintlocks, and a world of magic and wizards will have spells that turn bullets as well as arrows and magic armors mean that plate armor never goes out of style. Perhaps if the world has been in technological stasis, matchlocks were invented thousands of years ago (just like everything else), and like the halberd, plate mail, and crossbow, people are content with it. Guns don’t have to be rule-breakingly powerful in your game, nor do they have to be fluff-breaking. But now you know the history, and how to use, misuse, or subvert it for your game. In a genre noted for being historically inclusive in arms and armor, there’s plenty of room for ranged weapons of all sorts.

6 thoughts on “Historical Steel: Dialing in the Range”