Skip to content
Home / Delve into the Depths in the Kobold Blog / Monday Monsters: Atropos 13 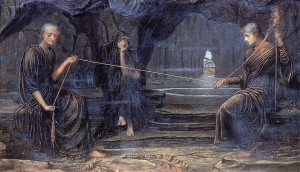 As soon as you lay eyes on this ancient crone, images of the deaths of all those you’ve loved and lost flood your mind. In these visions, you see the crone’s withered hand repeatedly lash out with an elongated pair of terrible shears to sever the gleaming, silver threads rising from your loved ones’ heads. The crone cackles in these visions as your loved ones crumple into piles of thread.

In real life too, she cackles as she approaches, pulling an elongated pair of terrible shears from behind her back…

Sisters fight. But when those sisters control the threads of life, well, things get . . . messy.

The Three Fates are immortal sisters. The maiden Clothos spins each mortal’s thread of life. The middle-aged Lachesis weaves these threads into the Great Tapestry of Fate. The crone Atropos cuts each thread when a mortal’s contribution ends.

In a sisterly squabble over whom mother loved most, Lachesis pitched Atropos headlong from the Outer Sphere, declaring that big sister’s “fate” would play out in the mortal world. When Atropos crashed to the Material Plane, her body smashed into thousands of pieces. Being immortal, however, the pieces didn’t die. Instead, each fragment became a hideous, hag-like creature possessing mere slivers of Atropos’s original powers. But each knows how to forge shears that sever the threads of life. Hatred verging on madness drives each to try to unravel Lachesis’s Great Tapestry by hunting down and cutting the life thread of mortals with potential to affect the world’s fate: everyone Lachesis might deem central to her precious weave.

Mirror Attack (Su) Anyone who inflicts hp damage on Atropos 13 must make a DC 33 Fortitude save or suffer identical damage. The save DC is Charisma-based.

Sever Life Thread (Su) As a standard action every 1d4 rounds, Atropos 13 can make a +39 melee attack with her shears to cut a victim’s life thread. Any victim hit must make a DC 33 Fort save or die, its body unraveling into a pile of thread. Only a miracle or wish can restore the victim’s life. This is a necromantic death effect. The save DC is Charisma-based.

Who is Lachesis, the author of this terrifying monster, you ask? Well, this amazing KQ fan is only 11 years old (hence, the alias)! It’s great that she sent her monster to us. It’s incredible that she took on an epic one. And, on top of all that, it’s simply an awesome monster!

Well done, Lachesis! And let me be the first to say, we can’t wait to see more from your pen.