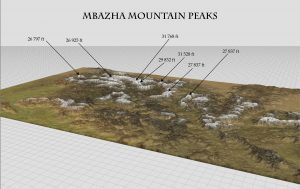 The Mbazha Mountains serve as the spine between the arid Crescent Desert and the plains of Narumbeki, and this range holds untapped wealth and wondrous secrets. Rumors speak of the fell magics of the Skin Stealer gnolls (Southlands, p. 93) or the glittering riches of the Diamond Caverns (Southlands, p. 152). Those who attempt to explore this region seldom return, and even the vaunted Narumbeki Legions find their advances into the region continually blocked by the Mbazha’s chief denizen: The Balalkeni (“Children of Balal”).

Flying atop dire eagles, dire hawks, and even gargantuan rocs, the goblins of the Balalkeni mercilessly descend from their mountain peak aeries to snatch up anyone foolish enough to wander into their territory. Though most tend to be druids or rangers, the Balakeni themselves appear much like their dust goblin cousins of the midlands (Midgard Bestiary, p.55; but change the alignment to lawful neutral). Led by Tin-Balal, the ancient cypress treant who sheltered the goblins from the rise of the Green Walker, the Balalkeni fight to the death to keep their lands unspoiled by the hands of other mortals or the corruption of the Living Jungle of Kush. This viewpoint has brought the Balalkeni into conflict with the Narumbeki Legions just as often as it has seen the two sides working together. As yet, the difficulty in uprooting the fierce goblins has held Narumbeki expansion into the Mbazha Mountains at bay.

The seven highest peaks of the Mbazha Mountains (and their corresponding Balalkeni aeries) are as follows: 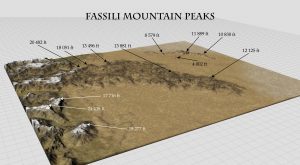 Smaller than their neighbors to the south, the Fassili Mountains strike off from the Mbazha like a dry, withered branch. Called “the Gray Peaks” by both travelers and Narumbeki alike, this area contains living creatures that shun the Fassili as a cursed place. This desolate region once hosted two different societies, and still does, after a fashion. Nestled on the slopes and in valleys, the curious can easily spot what appear to be picturesque towns and small cities, but guides quickly warn would-be explorers against investigating. The countless jinnborn ghosts roam streets of these places, their memories mostly obliterated and their souls heavy with both frustration and sadness. At least a dozen haunted communities exist in the Fassili, and none have yet given up the secrets of their death. Whatever obliterated their nation lingered and waited, striking down the second group that occupied the mountains.

From deep underground, the seven clans of dwarves arrived at some point in the past and established cantons. They raised iron towers to mark each settlement’s entrance and then dug into the earth with a furious passion. Unfortunately for them, they suffered a similar fate as the jinnborn; where the jinnborn became ghosts, the dwarves kept their bodies, creating enormous groups of mining zombies. These poor creatures simply dig, amassing more gems and ore to sit in waiting galleries. They repel invaders with a living passion, but those few who have penetrated the cantons report vicious and well-manned defenses, guarded by even more undead dwarves. A large number of small homesteads created by either race and scattered throughout the mountains appear to have suffered the same fate, leaving most to think the Fassili an evil and wicked land, while a few suspect a wizard or even a dragonne is responsible.