Skip to content
Home / Delve into the Depths in the Kobold Blog / Trapsmith: Test of Faith 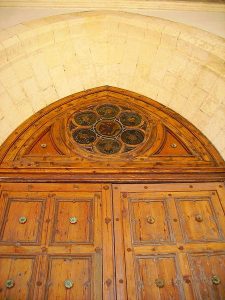 Faith must be tested! It is not enough to say the words and perform the proscribed rituals. Lip service is not faith. A true test of faith requires that the believer suffers, or so some trapsmiths and their clients believe. For this reason alone, trapsmiths have developed an extensive portfolio of faith-testing traps.

Most of these traps are located in temples, where they guard the inner sanctums from blasphemers and test the strength of the chosen’s faith.

And what these traps are composed of? Well, fire and the domain named for it are good starting points. Present in the first gathering of primitive creatures around a bonfire to the working of steel, fire has served to help grow civilization, though upon occasion fire also destroys it. Its role in the Fire and Community domains is why faiths with access to both domains use it in their tests of faith.

The trap below has some example visual elements that could help the viewer either find or avoid the trap (GM discretion). Each of these elements is based on the Community and Fire domains. (GMs can tweak the various DCs of the Knowledge skills based on campaign needs, or adjust the various trap DCs if he or she wishes to reward those who use their faith wisely to try to bypass the trap.) Otherwise, the prompts mentioned might serve only to add some interesting visual elements to the trap before it goes off—or after the characters have fallen prey to the trap.

The doctrine of Community mandates that unity prevails. Where one might fall, the group will prevail. A DC 18 Knowledge (religion) check reveals this information. Prompting this check is a set of runes: one indicates danger and the other represents the blessings of unity.

Fire cleanses and purifies, but fire always burns. As the fire adept grows in power, his or her soul becomes purer so the flames find less to feed upon. This simple truth of the Fire doctrine requires a DC 15 Knowledge (religion) check. The prompt for this check could be an illustration above the bishop’s private chambers.

The flaring fire trap is one of the favorite tests of faiths of the Community and Fire domains. Once triggered, the trap will try to catch as many targets in its effect as possible, thus fulfilling the precepts of the Community-minded worshipers. Woe to the lone trespasser who triggers it.

Those who are less interested in testing faith often order the flaring fire trap but let the trap fire on single targets only.

Some want a location trigger; this reduces the CR to 8.

Others want the trap to fire only once, going for a manual reset; this reduces the CR to 8 as well.

A few cash-strapped folk go for the location trigger and the manual reset; this reduces the CR to 7.