Skip to content
Home / Delve into the Depths in the Kobold Blog / Historical Steel: Back to the Power Curve 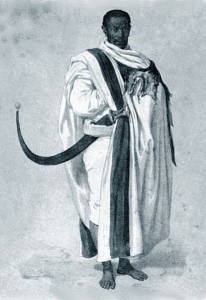 While the origins of the sword are clear, the history of single-edged blades is a bit murkier. Some such blades, however, have become iconic in Western history in their own right: the pirate’s cutlass, the scimitar of the Middle East, and the cavalryman’s saber. Others have failed to catch the limelight of history.

Back to the Future

Curved blades and single-edged swords were independently invented and reinvented across history. The Egyptian khopesh—the name a transliteration of a Canaanite sickle-sword (itself an update of a third millennium Sumerian weapon)—was a Bronze Age weapon that was effectively a hilted hybrid of sword and axe, designed for cleaving blows. Beyond this early statistical outlier is the Greek kopis, a curved sword derived from the civilian knife, and although less used than the more famous xiphos, it was a favorite weapon of Hellenistic cavalry; the historian (and soldier) Xenophon recommended the curved blade in his treatise On Horsemanship. The Iberian falcata was a parallel but later development, derived from the Iron Age Celts’ sickle-shaped knives, and went on to influence Roman sword design and the more famous gladius…

Other forms of single-edged curved blades sporadically appear in the post-Roman Dark Ages in Europe and the Near East, including Charlemagne’s sword of state and one of the Prophet Mohammed’s swords, but neither is related to the more famous scimitar. Contrary to popular belief, when the First Crusade was launched by Pope Urban II in 1095 to aid the Byzantine Emperor Alexios against the invading Seljuk Turks, both sides used straight, double-edged swords and curved blades were uncommon.

The scimitar actually has its origins in a Hungarian design that itself comes from a “proto-saber” in use from the 5th–7th centuries by the steppe tribes of the Huns, Avars, and Magyars. Curved backswords did not appear elsewhere in Europe or Asia Minor until the 1200–1300’s, after the Turco-Mongols of the Black Sea invaded Hungary, adopted the design, and spread it to the armories of both the Byzantines and the more familiar Ottoman Turks. The word “scimitar” itself is of etymologically uncertain origin, presumably Turkish or Persian and adopted into English by the 16th century. It refers to not a single weapon, but almost any West or South Asian curved backsword, as the Turco-Hungarian saber evolved into culturally distinct variants such as the kilij, nimcha, pulwar, shamshir, tulwar, and yatagan.

Away from the Crusades, another style of backsword came onto the 13th century field of battle to combat improvements in mail, plate, and helms. The falchion was a class of single-edged chopping swords originally developed in the 11th century similar to the modern machete and variable in length. Its heavy, axe-like cross section let it crush mail and helms without needing to slice. Although still more complex than a polearm, a falchion had a quicker learning curve than a double-edged sword, and while not a peasant’s weapon, it was cheaper and easier to make. Despite being featured in artwork, there are few surviving examples, and most in poor shape. This is not because of the quality of the weapon but because, unlike a nobleman’s war sword, a falchion may have also seen used as a machete, cleaver, or axe when off the battlefield—surviving examples have simply been worn out from use. Cross-pollination with the scimitar led to other similar backswords that survived well into the 16th century, including the Central European messer (or “knife”), the two-handed Großes Messer (or “great knife”) and the cutlass-like dussack. The cutlass itself derives from a Caribbean long knife that became a compact and versatile cutting and thrusting blade: it was handy enough on the close quarters of a ship that it remained in use by sailors (pirate or otherwise) from the 1600’s until the 1930’s.

As the cuirass fell out of fashion and Europeans again warred with the Mamluks of North Africa, the straight military sword and civilian sword were mixed with the shamshir to create the modern military saber, for curved slashing blades were again popular not only with cavalry but against the unarmored soldiers of the late 18th and 19th centuries. During this time, states began to both standardize and mass-produce swords for the first time, typically opting for simple but effective handguards and non-rusting brass furniture. Cavalry most famously were issued sabers. Infantry, if issued bladed weapons, might get a saber but, failing that, were issued hangers or spontoons. And while the debate over what the perfect sword “was,” it was this military saber that survived into the 20th century and into Olympic fencing.

The Curve, the Hack, and the Slash

Why bother with single-edged swords or curved swords at all? Well, much like the historical debate over the thrust versus the slash, backswords and curved swords existed because of the niches they filled. With no such thing as a perfect sword design, most sword designs tried to focus on a balance of concepts and lessons learned from battlefield experience, empiricism, and even physics. (A certain Galileo worked at the Venetian Arsenal, researching impacts and the physics of warfare.)

Curved blades do not “concentrate force” as the myth goes. What they do happen to do is an excellent job of translating a sword arm’s naturally curved motion into a slice when that edge connects. This is also not to say they’re better at slashing blows than a straight sword of equivalent cross section. Whether standing or from horseback, a curved blade makes it easier to set up effective attacks when using overhand strikes—and a blade optimized for cuts isn’t going to stick in an enemy when you ride past like a thrusting blade might.

Chopping, like an axe, uses a blade like a wedge to push material away. This depends both on the entire geometry of the blade and the center of percussion (or “sweet spot”)—the best place to effect a hacking blow. The blade’s sharpness is less important than the geometry. In contrast, slicing separates materials when the blade is dragged across it. This depends to some extent on blade geometry, but only where it applies to the tip; many straight European swords were almost blunt near the hilt and sharpened only in the area where a cut would be performed. All sword cuts are to some degree a mix of both. The famous Japanese katana is, effectively, a meticulously sharpened three-foot razor blade—specialized for cuts, decent for thrusting, but its thick cross-section makes it all but useless for effective chopping. A straight European sword (or a falchion) might not be as sharp because its thin cross-sectional area and chopping optimized-design meant that it didn’t need to be. Like the cut versus the thrust and other elements of sword design, straight blades, curved blades, chopping blades, and slicing blades all had their place on the battlefield based on the need they were made to fulfill.

6 thoughts on “Historical Steel: Back to the Power Curve”