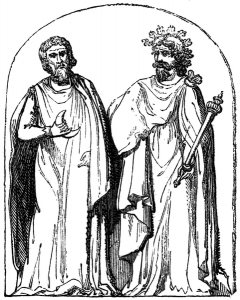 Only a group in the broader sense of the term, the Solitary Ones are a loose collection of patient and thoughtful mountain druids who seek to better commune with the land by getting far away from other people. However, there are few lands that don’t have at least a few inhabitants, so the members of this group have (grudgingly) agreed to meet on occasion and share the things they’ve learned about their area. The biggest goal of the group is finding new areas for druids to live, since many of them prefer to have no company while wandering freely across the land. Though they prefer to be alone, they’re not averse to guiding travelers away from danger and back toward civilization. Thoughtful travelers generally give a token of appreciation for the service; it’s not necessary, but the Solitary Ones really do like information about the world around them, especially if it will impact their learning.

Unlike many druids, the Shifters are actually quite sociable and friendly people, though this may have a lot to do with their habit of shape-shifting more often than druids usually do. Druids worship many things in nature and can often be found searching through ideas and philosophies, but the Shifters are particularly partial to what they refer to as “animal wisdom”—and they seek to gain more of this by regularly assuming the shape of an animal and trying their best to live wild. Where others might be consumed by the thoughts of beasts, they stay human (or at least humanoid, depending on their race) by regularly conversing with other druids and behaving as intelligent beings of their alignment are generally expected to, though the Shifters as a whole have a tendency toward neutrality. Unfortunately, not all of them can keep their minds straight, and the so-called “Wild Shifters” are a bit of a concern among the communities. The presence of so many druids shifting into alternate forms requires a lot of space, so the Shifters are usually found only in heavily forested mountain areas far from society.

Sometimes, people are called to nature. Other times, however, nature calls to them . . . and the Seekers are a small order of druids who travel to towns and cities near the wilds, looking for children to bring back and raise as fellow druids in the high mountain areas of the world. It takes a lot of work to be so focused on nature, and even more to add in such solitude, but mountain druids are particularly adept at that sort of thing. The Seekers also have a bit of an odd place in world events; using their talents, they work to protect the mountains from any intruders (good or evil), and their effectiveness at this means that anything other than a full army will avoid their mountains because it’s more trouble than it’s worth. The improved natural defenses are often taken into account for strategic planning, and it only gets more difficult for some when talented adventurers are drawn to the druid’s way of life and might just be at risk of leaving their groups.