Skip to content
Home / Delve into the Depths in the Kobold Blog / Tournaments: Blood on the Sand 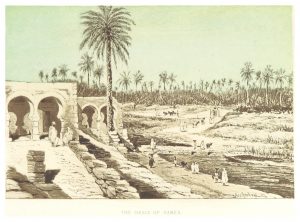 Water is life in the desert, and those willing to turn the dunes red with blood are usually the ones who control that water. Oasis guards always walk a delicate line, though, because while they are the ones who maintain control of the water, there has to be enough to sate them, as well as travelers paying for the privilege. On the other hand, if your force is limited by the available resources, all a rival has to do is send a larger force to take control and pull back some of his men once control is established. That leads to those holding control of watering holes to recruit the deadliest fighters, and even powerful spellcasters, to keep their claims safe.

In time, the nomadic chiefs and tribal leaders realized the toll was simply too high. So they agreed to meet once every five years to each bring a champion who would fight for their right to control the oases. These were the first instances of the Blood on the Sand tournaments, but the competition, like the tribes who began it, has changed over the many years since its inception.

From Water and Blood to Gold and Jewels

In the early days of Blood on the Sand, the tournament was a life and death battle over honor and territory. Most of the champions were the sons of clan chiefs or powerful warriors who spent their lives training to fight for their leaders. Year after year rolled on, and the tribes realized the sheer amount of wealth an ensured peace brought. Caravans and traders came through, laden with gold and gems, only too happy to pay for safe passage that the desert tribes, no longer warring over resources, were equally happy to provide. Those who controlled the water claimed the most wealth, and many of them used that wealth to attract the fiercest fighters to their side in future duels over who controlled the waters.

As the tournament cemented itself into desert tradition, some tribes began to train their fighters from the day they were born, pairing their strongest men and women to create the best possible offspring. Other tribes responded by hiring mercenaries to stand as champions, and in time, some tribes sought help from more dire powers. Geniebinders bent efreets to their services, and dark sorcerers from the blasted furnace of the inner desert summoned devils and demons from the pits of the nine hells. It became tradition to allow chiefs to bring as many potential champions as they wanted as long as only one stepped into the arena to assert their master’s claim. As the riches of the trade route grew, the stakes rose ever higher. Now, though the leaders of the tribes are all smiles and greetings when the tournament begins, each is looking for a soft spot to drive home the knife in order to gain even a slight advantage.

The stakes are high for the fighters, as well. While the tribal chieftains and minor caliphs are planning for their future empires, the warriors who step onto the sand are wagering their lives. While death is not a prerequisite for victory, most warriors fight to their last breath because it is more honorable to die in single combat than it is to have your throat cut in the dark of the night after you have disgraced your master. For some warriors, losing without dying means they now owe their lives to their opponent. This blood bond can be cruel, but there have been tales of warriors like Aeldric and Khan, who adventured together as sword brothers long after they’d left the oases behind.

What Blood on the Sand Could Mean For Your Party

What you choose to do with this particular tournament is up to you, and you can shape it to fit your game’s needs. For example, a smaller tribe that boasts no great warriors of its own may be looking for mercenaries to act as their champions. If your players come from a famed party, they could take short-term service with the tribe with each member of the party stepping in to act as champion in a duel where they have an advantage. Alternatively, the party could be there to help maintain the integrity of the duels, investigating deception and sniffing out corruption. Perhaps, they are rewarded by the tribal elders for showing that one of the caliphs is buying off other champions, but by taking that action, the party has also made a powerful enemy.

If you don’t want to make the tournament the center point of your campaign, or at least a chapter of it, it can easily figure into the background of your game. For example, if your paladin has a desert ranger as a companion, it’s possible the two of them began their adventure on opposite sides of an early match in the tournament. You may have a player whose character is from the desert region, and she is adventuring in order to become a warrior powerful enough to stand a chance at victory in the upcoming Blood on the Sand. Perhaps one of the characters is the child of a former champion, and they’re trying to find what happened after the tournament when their father or mother just vanished. Are they dead? Or were they a creature of elemental, infernal, or draconic blood, who left more than a sword and a strong sword arm to their offspring?

For ideals places to set your Blood on the Sand tournament, check out Southlands.