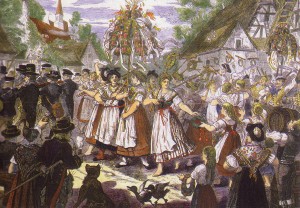 With Thanksgiving for this year in the past, we now have a bit of a breather before the next big holiday happens. Read on to gain some harvest festival inspirations for some world-building elements for your campaign. We also hope that you had a wonderful Thanksgiving Day!

We continue a great worldwide tradition of late-autumn harvest festivals in North America with the American and Canadian Thanksgiving holidays. I’ve found in my home campaign that festivals like this are a welcome respite from dungeon delving and a chance to have fun and catch up with town NPCs. A good festival can add a lot of color and action to your game.

In medieval times, late November and early December was the time when animals, especially pigs, were slaughtered. The lords and landowners chose which animals would be kept and fed over the winter, and which would be killed and processed into storable food. There simply was not enough fodder and space to allow all the animals to live, and this choosing of victims can be the basis of a number of rituals or events in the town.

A festival like this is a great time to schedule an honor duel (magical or physical), elections or referendums, and major announcements. Also, Kariv entertainers and/or a carnival may come to town, bringing both amusement and complications.

Peasants and priests would often do sympathetic magic during this time. For example, a corn dolly was a figure made from the first straw of harvest, and it was stored during the winter and buried with the first planting of the new growing season. The idea here was to return the live-giving force to the land in the spring, after protecting it all winter. In Midgard, this could be a literal truth—an evil force could steal the fetish from the priestess of Freyja and cause the land to be barren.

Another tradition was for the first loaf of the harvest to be allowed to go stale and then scattered around the corners of the barn where the harvest was stored. Again, failing to do this ritual could cause actual havoc in a magical world.

The locals may act out a passion play, a procession, or a strange ritual as part of this process. A great resource for this is Your Whispering Homunculus: 20 Holy Days, which you can find on this site.

The lords and ladies of the town, along with higher guild members, powerful political figures, and rich adventurers, will be invited to the great hall of the lord for a grand feast. A bard of renown would entertain folk with music and stories. This would be a time to go all-out with food and drink: elaborate meat pies in fanciful shapes such as buildings, people, and monsters; huge roasts studded with rare and expensive spices; and candied and sugared fruits and cakes. Note that salt, spices, and sugar are quite expensive in medieval times, and that may be used for flavor in your campaign. A major item in the festhall is the salt-cellar: a highly decorated safe in which salt and spices are kept until needed. The lord or their seneschal carries the key to this cellar as a symbol of their dominion and ritually unlocks the cellar as part of the feast. After the feast, there may be speeches, dancing, or tests of strength and skill.

Lesser folk would gather in the town center, or perhaps a great barn, and set up trestle tables for a common feast. They would eat pies with organ meats, blood puddings, and other fresh by-products of the recent slaughter along with fall fruit and vegetables. Sweets made from honey and fruit are served as well. Entertainment here is rougher: Loud singing, heavy drinking, and perhaps some Kariv entertainment. The peasants will engage in bizarre bets and daft dares (see Your Whispering Homunculus: 20 Daft Bets & Dares). By the end of the evening, both romance and pugilism are going on.

3 thoughts on “Harvest Festivals in Your Campaign”