Skip to content
Home / Delve into the Depths in the Kobold Blog / To the Birds: Winged Karasu (Part 4 of 4) 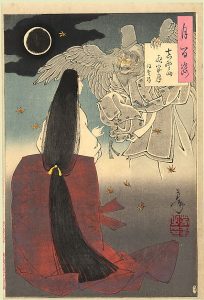 The winged karasu is an esteemed combatant and spiritual guide for many, including the lesser tengu of the material world. Over 5 ft. tall and around 140 lb., this being is nimble on both the ground and in the air although it prefers combat on the ground, especially melee combat using bladed, sword-like weaponry in honorable opposition.

Black feathers cover the creature’s entire body and a raven-like beaked face like that of a bird, and it flexes sharp talons on its hands and feet. It wields the twin blades of the samurai—a masterwork set katana and wakizashi…

Tengu Mimicry (Ex): As the feat, Tengu Mimicry (see Kobold Quarterly +14). This ability is usable at will and subject to the same rules as the feat, and the winged karasu need not fill the skill rank requirements to use it.

Wing Baffle (Ex): A winged karasu uses its wings even in combat, though not to make slam attacks; it supplements its melee combat with the slaps and whips of its wings to buffet and disorient its opponents. Each round, in addition to its normal attacks, a tengu may make a Bluff check against an opponent’s Sense Motive roll while in combat. If the check is successful, the tengu gains a +2 circumstance bonus to attack rolls for 1 round.