Skip to content
Home / Delve into the Depths in the Kobold Blog / Your Whispering Homunculus: 20 Holy Days 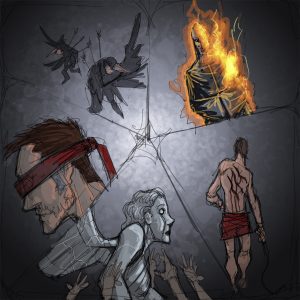 Master Pett’s Your Whispering Homunculus presents only the finest in British gaming. Indeed, you are not likely to find a more comprehensive assortment of miscellany anywhere.

“Ah, the welcome routine of religious festivals—the harvest, midwinter, spring. Such times of joy and celebration that add color to the places they take place in.”

“Master, I feel a task coming my way.”

“Master, you have but to ask…”

Religion dominates the medieval world, and fantasy settings are no exception. The calendars of religious orders dominate the weeks, holidays, and festivities of local people. While many notable holy days and celebrations are recorded in campaign calendars, you may wish to provide a few more local or unusual events to spice up your streets. These ideas are given with a suggestion to the type of spell most likely to be celebrated at this time: consider this spell either as a taboo or as a bargain while the celebration takes place, perhaps by lowering the price by as much as 30% or by making its casting—even by independent clerics—forbidden.

You may wish to insist that these local celebrations are observed by visiting clerics who face being ostracized by the local church(es) for failure to observe the celebrations appropriately (for, by example, not being blindfolded throughout the holy days). Punishment could range from a lowering of Diplomacy checks when dealing with clerics of the offended church, refusing to deal directly with the PC again, or even worse.

Celebrations last at least as long as listed below but can last as long as you wish. If you want to assign a random duration, 1d6 days is appropriate.

1) The Martyrdom of Saint Hargwell of the Eyes: This celebration marks the martyrdom of the saint, who had his eyes removed by heathens for refusing to recant his faith. His followers wear a bloodied blindfold for the duration of the celebration but are kept fed by locals and guided by local children. (remove blindness)

2) The Flaying of the Angel Mortyrr: Holy men wander the streets naked from the waist up, whipping themselves with scourges and recalling how the Angel Mortyrr was so slain here seven centuries before. (cure spells [all])

3) The Burning of Saint Welb: Manikins of the saint are burnt nightly for a week in commemoration of Saint Welb, who was burnt in his church by beasts with men’s faces. Each service ends with a vial of holy water being cast onto the ashes of the fire. Huge candles burn in holy places and are the subject of service and prayer. (bless water)

4) The Resurrection of the Beast: All fires are quenched at dusk and left cold until the dawn. Lighting a fire is said to bring terrible fortune to those who see it today and risks summoning the Beast, a vile and enormous bestial devil. Those who avoid seeing fire during the night are said to be cured of any curses. (remove curse)

5) The Celebration of the Bowing Monk: Holy men (and women) bow to everyone they meet for a week and a day, and they hand out lucky prayer scarves of white silk that have a peacock feather sewn in—a ward said to protect those who wear them. (glyph of warding)

6) The Tongue-less Martyr Orbrant: Holy men and pilgrims wear a gag and refuse to speak, to honor the martyr Orbrant, whose tongue was cut out before he was slain to prevent him revealing the location of an evil brotherhood through speak with dead. (speak with dead)

7) Saint Ashes Day: When Memorus, a local monk, was burned alive by heretics, his broken holy symbol was found and made whole again by his followers, who parade obviously repaired broken holy symbols (some of great size) through the town. Smashing of drinking vessels is said to bring a year’s good luck, and sales of tiny clay drinking vessels are common. (make whole)

8) One Bound Hand: The unnamed saint is celebrated by the binding of each pilgrim’s left hand and smearing blood upon it, making it appear like a stump. The hand, in which the saint held a holy symbol, was severed by a demon. The left hand is not used throughout the festival by pilgrims and followers. The saint’s hand was regenerated, and he later returned with a religious force and slew the demon, dying himself in the process, still clutching his bloody holy symbol. (regenerate)

9) Saint be Drowned: This celebrates the tale of a local saint who was drowned and whose body rested in gentle repose until a holy bishop could come to resurrect him. Followers cleanse their souls by a holy ceremony where they are dipped into the nearby river by clerics. Flotillas of boats cram the waters during the celebration. (gentle repose)

10) Night be Gone: This night celebrates an ancient event when the settlement was beset with zombies and devils after the death of the local hero Torril Quane at the hands of local undead worshipping cultists. The story goes that a local boy stole into the cultists’ lair to recover a fragment of Quane’s body, which he returned to the local bishop who resurrected the hero, who subsequently joined the bishop in driving off the evil horde. The locals either dress as zombies or bandage a portion of their bodies in homage to Quane. Throughout the festivities, local boys are given sweets and small coins to honor the boy hero. (resurrection)

11) Brother Broken Back: This celebrates a holy man who was offered a deal by a powerful devil: if he could drag a wagon containing a score of monks through the town to a chapel, the devil would spare them. Although his strength left him on many occasions, his monk followers restored it with bread on the journey. Brightly decorated wagons and carriages fill the streets during this festival. (lesser restoration)

12) The Blasphemy of Caben: The tale of a brother tempted by a succubus is celebrated in this cautionary story. Visiting a local brother, Caben was charmed by a succubus and spent a night with her, losing all his powers (levels) and waking a shade of manhood. Luckily, his power was enough to keep him alive and, after being punished and restored by a canon, he returned to the brothel and drove a holy stake through the succubus’s heart, killing her instantly. During this festival, men walk the streets armed with stakes while the women seek out husbands among them by attempting to steal a kiss. Once kissed, the betrothal is confirmed and woes betide anyone who breaks the tradition. (greater restoration)

13) The Whisper Angel: A holy statue of an angel is said to weep, sing hymns, and make prophesies. During the celebration, the statue is paraded throughout the streets on a huge wagon, and people throw flowers and holy water onto it. Many people touch the statue and ask it questions, with some people claiming to get answers, be cured of sickness, or hear her sing. (commune)

14) Tell Me Chancing: Throughout the week, a special local bread is baked that contains lucky or unlucky tokens. This bread is widely eaten, and each year a tiny, valuable silver holy symbol encrusted with gems is baked into one hidden bread, with the finder allowed to keep the holy object. The celebration is said to be based upon a fabled local priest who cast augury spells and dispensed the advice in special breads with messages in jars within. (augury)

15) The Silent Song: A religious festival where local holy men and women bind hefty bandages over their ears to honor the memory of Sister Carmen, who had her ears severed after refusing to listen to the profanity of invading warriors. (remove deafness)

16) The Staggering Crow: Locals don crow masks and speak in humorous caws to celebrate the message brought to this settlement by a crow from Sister Beloved, mother-mistress at a nearby nunnery, which had been raided by hobgoblins. The crow had three arrows in its body but still delivered the message and summoned an army to drive out the hobgoblin invaders. Hunting or eating any bird at this time is forbidden. (sending)

17) The Talking Corpse: Locals sleep on the graves of their family members in the hope that some piece of advice is given. The story goes that a potter in the settlement when drunk fell onto the grave of his father, who whispered advice to the good-for-nothing son to buy a horse from market. The horse, it transpired, was the stolen steed of the local king, who was so overjoyed when one of his knights saw the potter had his horse, gave him his weight in gold. (divination)

18) See-Me-Far: On this night, mirrors in the settlement are said to have divine capabilities, and those who have pure souls can gaze into them and see what fate is befalling loved ones near and far. (scrying)

19) Light in the Dark: On this night, paper lanterns are lit and allowed to drift into the sky at midnight to ward away evil gargoyles said to sleep on the clouds above. (continual flame)

20) Jack-Be-Yesterday: The story of Jack-Be-Yesterday is a sad one. The woodcutter went into the woods one day to find an oak tree big enough to make a huge table for his wife, who was pregnant with their first child and promised him a huge family. Unfortunately, Jack strayed into a strange part of the wood and met a giant who chopped him in half. When later his bride learnt of his horrible death, she prayed that the day had never happened and when she awoke, found her wish had come true. Knowing about the giant, she persuaded her husband to tell a group of passing heroes about the giant, and they went to his lair and slew him. Strangers (particularly those who may be adventurers) are much feted and loved by the locals during this festival; indeed, cynical folk may find the local’s showering of gifts and love a little suspicious. (restoration)