Skip to content
Home / Delve into the Depths in the Kobold Blog / Grimm Tales: The Frog King or Iron Henry 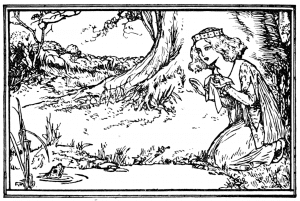 The story of the princess and frog is one of the better-known tales, but the version the Grimm Brothers recorded is much different than the one commonly told. In their version, the princess is a spoiled brat who has to be constantly reproved into keeping her promises, and there is no mention of the famous kiss often associated with the story. Sadly, Iron Henry, the only character to be given a name in the tale, has been forgotten over time.

Both the frog king and Iron Henry are great examples of people who have had curses placed upon them, and in Iron Henry’s case it was a self-imposed curse that bound his heart in iron bands so that it would not break with grief. The king was cursed by a wicked witch and turned into a frog, though it does not say why. He does explain that the princess is the only one who can remove the curse, but in the story all she did was show contempt and anger toward him. The act of throwing him against the wall caused the curse to be lifted.

Witches turning people into animals wasn’t anything new when the story was collected by the brothers. It has been so common in literature, myth, and stories that it is also one of the earliest spells of Dungeons & Dragons. Today, Pathfinder has the spell baleful polymorph, which has some great uses to it. This is even more true if you are willing to let your victims live in little cages you carry around.

Princesses are not required to break the effect of this spell, and the spellcaster who cast the spell can easily dispel it with a dispel magic spell. This means that a creature can be turned into a Tiny or Diminutive animal that can be easily caught, put into a cage that can be carried around, and then brought back to normal when the caster needs a good distraction or extra muscle. A hydra, for example, could be turned into a crab and put into a cage. The cage could be placed in a room that the spellcaster needs temporarily blocked while he or she escapes, and then could use dispel magic from a safe distance to create a little chaos. Be warned, though, that antimagic zones can create instant chaos and death if that spellcaster isn’t careful about the number and location of occupied cages.

There are other fun and entertaining uses for baleful polymorph, such as using it on an ally who has their Will save augmented to help them keep their mental ability scores. Because saving throws can be willingly failed, these allies can be turned into a bird or other animal to go out and scout ahead for as long as they need to, or be put into a form that can access someplace hard to reach but within sight. As long as the spellcaster can see them and is in range, they can use dispel magic to remove the effect. It isn’t the most effective way to accomplish those tasks, but it could work.

Cursing yourself as Iron Henry does is not something people consider doing at all in Pathfinder unless there is a plot-driven reason for it. What Iron Henry does is not completely explained, but it is clear that the effects both benefit him and curse him. In this case, the curse is beneficial because the effects suit his desires. He does not want to feel the great pain of losing his lord and friend, and so he bound his heart in iron to keep it from breaking. No doubt this is trading physical pain for emotional pain, but he may also be giving up the ability to feel any emotion at all.

The following spell could be used to create a similar effect.

The creature affected by this spell has iron bands wrapped around its heart, causing it to lose its ability to feel emotions and forcing it to become apathetic and passionless. It is immune to fear and emotion-based effects but cannot benefit from morale bonuses. Additionally, it takes a -4 penalty to all Charisma-based skill checks and to Sense Motive checks.

1 thought on “Grimm Tales: The Frog King or Iron Henry”